John Bolton Says Situation In Venezuela Is 'Clearly Not A Coup' 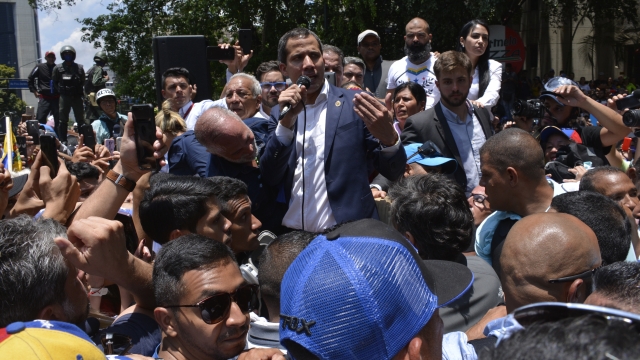 U.S. national security adviser John Bolton told reporters Tuesday the situation in Venezuela "is clearly not a coup" after opposition leader Juan Guaidó called on his supporters to hit the streets and take back their freedom.

Bolton said the the president is watching the situation "minute by minute," but that the administration does not view it as a coup because it considers Guaidó to be the country's leader. He said the Trump administration sees the clashes as a "potentially dispositive moment" as Venezuelans seek to "regain their freedom." But he also said it's "a very delicate moment."

Guaidó has been trying to push Venezuelan President Nicolás Maduro out of power ever since he declared himself the country's president in January. Since then, the U.S. and other countries have recognized Guaidó as Venezuela's legitimate leader.

On Tuesday, President Trump threatened to impose an embargo, along with "highest-level sanctions," on Cuba if its troops and militia do not "cease military and other operations for the purpose of causing death and destruction to the Constitution of Venezuela."

Cuba's foreign minister tweeted his country is standing in solidarity with Maduro. But a coalition of several Latin American nations and Canada called the Lima Group is backing Guaidó. In a statement, the group said he's trying to "restore democracy" and called on Venezuela's military to join forces with Guaidó, not Maduro.