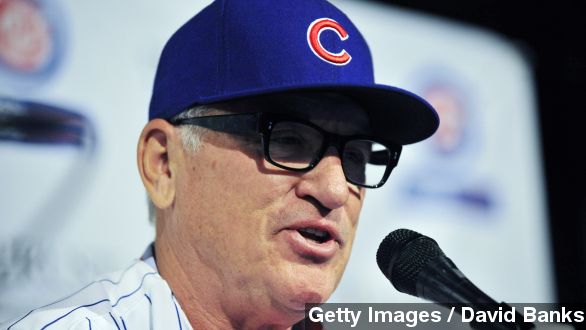 SMS
Joe Maddon Signs With Cubs, Leaves Rays In Fishy Deal
By Jay Strubberg
By Jay Strubberg
November 3, 2014
Manager Joe Maddon signed a five-year, $25 million deal with the Chicago Cubs Monday but some question the merits of how the deal went down.
SHOW TRANSCRIPT

Manager Joe Maddon signed a five-year, $25 million deal with the Chicago Cubs Monday — a deal that could potentially make the team a legitimate World Series contender. And no, pigs won't have to fly.

But it's how the deal went down that has raised a few eyebrows among the sports media.

So here's all hubbub in a nutshell. Maddon recently opted out of his contract with the Tampa Bay Rays.

But the 2011 AL Manager of the Year reportedly wasn't even aware he could opt-out of the Rays deal until his agent told him.

Then, Friday, the Cubs axed manager Rick Renteria, who still had a couple years left on his contract and nabbed Maddon a few days later.

The rapid personnel shuffle has some questioning if the Cubs tried to appeal to Maddon while he was still under contract with the Rays — which is against the rules.

A writer for Tampa Bay Times says, "This whole thing stinks to high heaven. It smells rotten and it looks shady and it feels dirty. No matter how you slice it, it all just feels wrong."

The Times also says the Rays are "considering filing tampering charges" or have MLB investigate to see if the Cubbies, in fact, tried to woo their manager while he still worked out of Tampa Bay's clubhouse.

But Rosenthal also says there's not really a concrete system in place to determine the penalty if the Cubs made contact with Maddon while with the Rays. "This is the way baseball operates. Actually, it’s the way most large businesses operate. The end justifies the means, however unseemly those means might be."

For his part, according to sources for CBS, Maddon had offered the Rays a deal to keep him, but the price tag was reportedly more than they were willing to pony up.

No matter how it went down, Maddon is considered one of the top managers in all of baseball. He essentially helped build a scrappy Rays franchise from the ground up and took them to World Series in 2008.

Couple that with Theo Epstein pulling strings in the back office — who, lest we forget, helped Boston get back to baseball's promised land in 2004 — and the Cubbies could become a contender once again.