Biden Wants To 'Protect and Build on Obamacare' 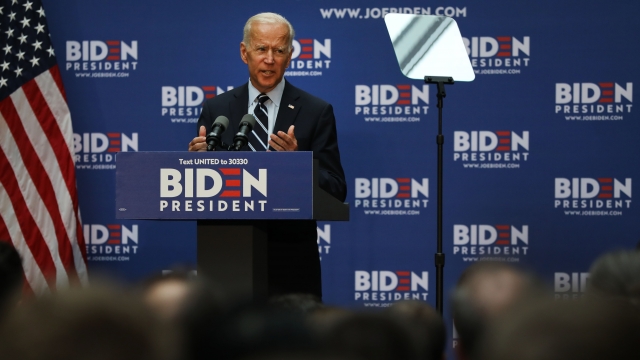 SMS
Biden Wants To 'Protect and Build on Obamacare'
By Johannah Grenaway
By Johannah Grenaway
July 15, 2019
Joe Biden introduced his health care plan, which would be a public option to enroll in a government plan that exists alongside private insurance.
SHOW TRANSCRIPT

Joe Biden announced his plan for health care on Monday, should he become president. The presidential hopeful said he wants to strengthen the Affordable Care Act, which was signed into legislation in 2010 by his old boss, former President Barack Obama.

"I believe we have to protect and build on Obamacare. That's why I proposed adding a public option to Obamacare as the best way to lower costs and cover everyone."

Biden's $750 billion health care plan would include a public option for people to enroll in a paid government plan that exists alongside private insurance. He proposed partially paying for it by raising taxes on the wealthy. President Trump cut those taxes in late 2017.

Biden says his plan is designed to help lower premiums by increasing the value of tax credits for those who use the plan. He would also try to repeal an existing law that prohibits Medicare from negotiating lower prices with drug companies.

It's one of many ideas presidential hopefuls have for what to do with health care. Some of Biden's competitors, like Sens. Bernie Sanders, Kamala Harris, Kirsten Gillibrand, Cory Booker, and Elizabeth Warren support a "Medicare for All" system. That plan would eliminate private insurance and introduce a Medicare-based, single-payer system run by the government.

Biden said he was proud at how many people Obamacare helped cover, and it makes no sense to "start over" when it comes to crafting a health care system.