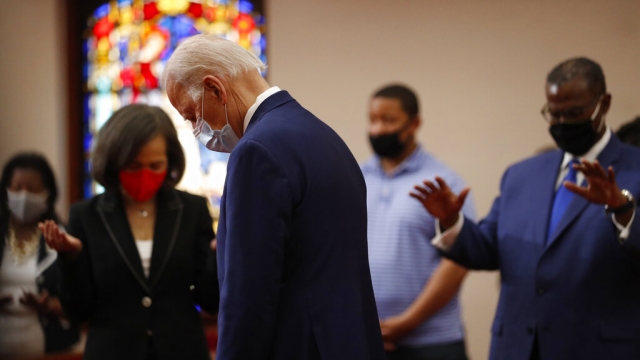 Throughout the Democratic convention and campaign there’s been an emphasis on Joe Biden’s religious faith.

“Being raised as a Catholic and educated by the nuns," said Biden during a campaign ad.

With the DNC rolling out ads like this one.

Politics and religion author Jack Jenkins says there’s a reason for that.

“When they are really lifting up faith and Joe Biden's faith over the course of this convention. They're trying to draw a moral contrast between Trump and Biden,” said Jenkins.

The convention aside, Jenkins says Biden has been vocal about his faith for years, often seen carrying his late son’s rosary during difficult moments.

“he was apparently thumbing it underneath the table when you know, as Vice President, when he was in the Situation Room when US navy seals were raiding the compound of Osama bin Laden. When he was at risk of having brain surgery, he apparently asked doctors to let him have the rosary underneath his pillow," said Jenkins.

“Faith is what helped me get through the loss of my wife and daughter," said Biden.

Should he win he’d be the second Roman Catholic president in history — the only other, President John F Kennedy.

And being Catholic isn’t a negative factor for a candidate like it once was, when candidates had to address concerns they would be more loyal to the Vatican than to their country.

According to Gallup, 33% percent of people said they would not vote for a well-qualified Catholic to be president back in 1940. Today that number is just 4%.

However, Biden’s support of abortion rights has become a factor with conservative Catholics and Evangelicals, providing fuel for President Trump'’s campaign.

“Joe Biden and the Democratic left would undo all the progress we’ve made in the cause of life," said VIce-President Mike Pence.

About 15% of religious voters say abortion is the most important factor when choosing the next president.

"Pope Frances says yes, it’s important to care for the unborn but it is equally sacred to care for the born and to reject racism, care for economic justice, care for the sick and diasbled, victims of trafficking economic slavery and the situation with migrants,” said Sister Simone Campbell.

Campbell, who will deliver a prayer at the DNC Convention Thursday told Newsy, while not officially endorsing Biden her group, Network Lobby, has created a scorecard for fellow Catholics, encouraging them to consider the canopy of quote “sacred priorities.”

Though Catholics make up about 20 percent of the country, they are not a predictable voting bloc for either party.

Catholics split their vote pretty evenly between Republicans and Democrats in 2016 and the 2018 midterms.