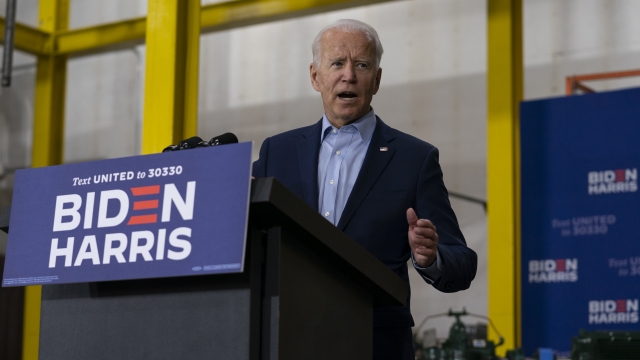 James Packard: "Joining us now. Alex Miller, political reporter and someone who has an acute understanding, I think Alex of the weight of this, not only in terms off Ruth Bader Ginsburg's gravity as a cultural icon and a jurist, but also the political fight to come here. Right now you cover the Biden campaign for us. Joe Biden was chairman of the Senate Judiciary Committee during Ruth Bader Ginsburg's nomination. He knows her. He knows the magnitude of her presence on that bench, the magnitude of the legacy she leaves behind. I mean, this is not any small loss he understands for the court and for politics. But also he gets how big of a loss this is, culturally as well."

Alexandra Miller: "He does. And I mean, he's presided not only over her nomination, but he also presided over some really contentious nominations back in the 90s. When you think about Bork and then now Justice Clarence Thomas, he knows how contentious this process can be from the Senate side, as well. And so that is part of the reason why he came out last night saying that, um, this nomination should be held, actually echoing something, he said, James, back in 1992. I want to read you part of his floor speech from this. He said: 'It is my view that if a Supreme Court justice resigns tomorrow or within the next several weeks or resigns at the end of the summer, President Bush should consider following the practice of a majority of his predecessors and not and not name a nominee until after the November election is completed.' This is a similar situation to what we find out a first term Republican president, and he's likely echoing this in some degree because, um, Bush didn't win. And then Clinton won the election and RBG was able to be nominated. And so he sees this as kind of his pathway. Republicans, on the other hand, actually used this specific statement in 2016 during Merrick Garland's nomination process, when they declined to hold any hearings for him or really meet with him largely and so, you know he's trying to kind of take this statement back and use it to his benefit where Republicans for the last four years have kind of relied on it for theirs."

Packard: "Biden ignored a question last night on court packing, Alex. He and the president both ignoring political questions last night, sticking to remembrance of the woman we lost. But for Joe Biden, I mean, he has said he doesn't want to add seats to the court. If Republicans succeed in confirming whoever the president nominates, do you think Joe Biden will find a lot of enemies in his own party if he doesn't add seats to the court and wins the White House?"

Miller: "I mean, it's definitely possible. Look, he has to win this election first. And I think, frankly, this might drive some Democrats out to vote that weren't necessarily planning on voting for him. I turned on Instagram Live yesterday and Congresswoman Alexandria Ocasio Cortez had 60,000 people on within just a few minutes talking about the need to get out and vote and make sure that this essentially doesn't happen again. We already see that the campaign is fundraising right now on protecting the legacy of Ruth Bader Ginsburg. I think that one thing Biden may do is talk about essentially taking a pause and thinking about the long term impacts of court packing, because, you know it's not the exact same situation, but Harry Reid got rid of the filibuster, having nothing to do with Supreme Court nomination and look at the fallout that has happened because of that. So there has never been more than nine justices. You don't have to have nine, but we've only had a little as six. Otherwise, there's been nine for over about 100 years. And, James, I looked at the list of progressives in the Senate and kind of trying to figure out where they stand. It's not cut and dry. Progressives versus moderates on this issue. Yes, you have the most progressive Sen. Ed Markey talking about packing the courts. But when you look at the other progressive senators like Sen. Cory Booker, Elizabeth Warren, Sen. Harris, Sen. Kirsten Gillibrand, they've all said they are open to it. But even Sen. Bernie Sanders has said that he doesn't support packing the court. So it's. I think it's gonna end up being a little bit more nuanced. I think it also depends about how much anger there really is with who is actually eventually seated on the court. Should that happen."

Packard: "And, of course, who's seated on the court raises a lot of questions about the future of some key issues in this country. There's a fight coming in the Supreme Court on the Affordable Care Act, obviously a lot of concern this morning from people who are supportive of Roe v. Wade that that will be overturned. I want to focus on that because it seems the most immediate concern for a lot of conservatives, Doug Collins, for instance, the representative from Georgia getting a lot of attention for something he said on Twitter. I believe it was last night, and it just illustrates what a what a front of mind concern this is for people like him."

Miller: "Yeah. I mean, it's interesting that Doug Collins made the statement he did. He basically two hours after this was announced, he said, RIP to the more than 30 million innocent babies that have been murdered during the decades that Ruth Bader Ginsburg defended pro abortion laws. Look, he is running for Senate right now, so as a member of the House, he doesn't have to stay in this. But it's interesting because Georgia is not a ruby red state like it used to be that he thinks it's as important of an issue to bring out that he might be able to drive out more voters on this issue. He used to be the ranking member of the set of the House Judiciary Committee. So for him to say that really does hold some weight. Look, I interviewed Sarah Weddington. I think it was last year who argued Roe v. Wade. And she was very concerned. We talked about this around the time the Justice Kavanaugh, um, was being nominated, and, um, pretty much what she said was that she was concerned that Roe was going to be overturned. But the larger concern is beyond Roe for a lot of liberals, it is that there are going to be, um, cases that they're able to chip away at Roe and come at it from a bunch of different perspectives, and that in itself may not overturn Roe v. Wade. But it would essentially take away a woman's right to choose. And I think something else that we really need to be paying attention to is what court cases the court takes up. They have to vote if they even want to take up a case. And typically, Chief Justice John Roberts has been the swing vote on this. Well, he doesn't really have to be a swing vote. If there are only three liberal justices, they're not gonna be able to see certain cases be even taken up and heard if they don't have somewhat of a balanced court."

Packard: "I was just gonna make that point because, you know, there was a lot of talk after the Kavanaugh confirmation that, you know, John Roberts became sort of more of a aggressive swing vote on that court because he saw, uh, sort of a need for balance there. He certainly had a shift of sorts. And as you mentioned, even if he were to change entirely his his political ideology overnight, uh, it wouldn't be enough there because there would only be as you mentioned those three justices Sonia Sotomayor, now sort of the liberal leader on on the Supreme Court. Alex, um, I appreciate your reporting and your perspective on this. It's always a pleasure to talk to. You appreciate it, friend. Thank you very much."