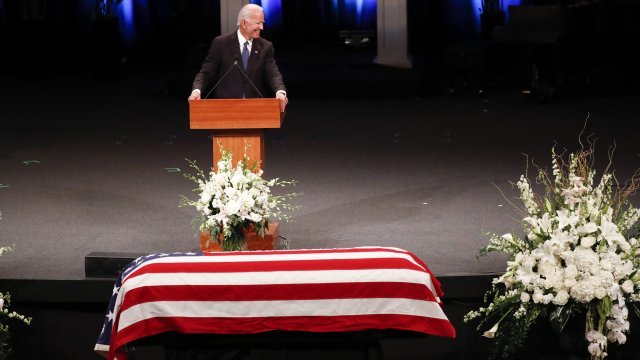 Thousands of people gathered Thursday in Arizona for a memorial service for Sen. John McCain.

A handful of people, including former Vice President Joe Biden, spoke during the services, sharing stories about the late senator and his legacy of bipartisanship.

"My name is Joe Biden. I'm a democrat. And I loved John McCain," Biden said at the start of his eulogy.

"He celebrated differences. He embraced humanity, championed what was true and just, and saw people for who they were," said Larry Fitzgerald, NFL player and friend of McCain.

"And i hope that what he stood for will maybe get a renewed look in our country. ... But he believe so much that, in the end, when it's all said and done, that this Republican and Democrat thing's not that important. We're all Americans, and we got to get to the point where we can work together as Americans," said Grant Woods, McCain's former chief of staff.

On Friday, McCain will lie in state in the U.S. Capitol. A funeral service at the National Cathedral is set for Saturday, and former presidents Barack Obama and George W. Bush will speak.

McCain will be buried on Sunday at the U.S. Naval Academy in Annapolis, Maryland.