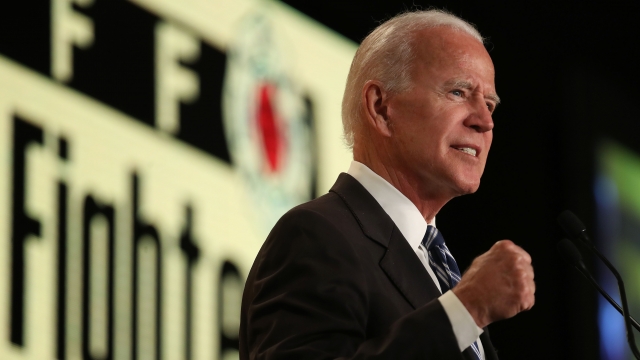 SMS
Why Joe Biden's Role In Drug War Could Stunt His 2020 Campaign
By Kellan Howell
By Kellan Howell
April 24, 2019
Joe Biden's role as chief architect of some of the U.S. toughest anti-drug laws could be a major liability for his 2020 campaign.
SHOW TRANSCRIPT

Former Vice President Joe Biden seems primed to be at the head of a crowded Democratic 2020 field. But his role as a leading architect in America's crackdown on drugs could be a major liability for his campaign.

"I think the problem with Joe Biden isn't that he was a passenger on the Drug War train, he was driving it," said Michael Collins, a spokesman for Drug Policy Action.

In 1988, as chair of the Senate Judiciary Committee, Biden co-sponsored the Anti-Drug Abuse Act. The bill led to new mandatory minimum sentences for drug offenders and created a sentencing rule that led to stiffer punishments for crack cocaine users than those who used powder cocaine.

In 1989, when then-President George H.W. Bush called for $8 billion to help law enforcement in the war against drugs, Biden said it was inadequate and called for stricter punishments for both drug users and dealers.

"The president says he wants to wage a war on drugs, but if that's true, what we need is another D-day, not another Vietnam. Not another limited war, fought on the cheap and destined for stalemate and human tragedy," Biden said in remarks he gave in response to Bush's drug policy announcement.

Then in 1994, Biden spearheaded the Violent Crime Control and Law Enforcement Act, a bill that touched nearly every aspect of law enforcement and is credited for leading to a boom in for-profit prisons and mass incarceration.

And while every other candidate in the 2020 Democratic primary supports marijuana legalization or decriminalization, Biden hasn't jumped on the 4/20 bandwagon yet. His position on marijuana itself hasn't wavered much over the years; in 2010 he said legalization would be a mistake. And He has been relatively mum on the issue since.

"Any person today who is a serious candidate for any high elected office who doesn't really look at marijuana at least decriminalization if not legalization as what is needed in this country as a baseline, if somebody doesn't take that position, it's going to be really hard for them to convince people who have criminal justice reform as a top issue that they're a serious candidate," said Ed Chung, vice president for Criminal Justice Reform at the Center for American Progress.

Chung, who served as a senior policy adviser on criminal justice, policing and civil rights issues under the Obama-era Department of Justice, says Biden Can still make the case that his views have evolved, along with the country, when it comes to drug policy.

"The question is what policies and what positions is he going to take now as president and is it going to be a continuation of some of the things that he championed under the Obama administration," he said.

But Collins says there's not much Biden can do or say that will erase the damage of his former policies.

"I think it's a very easy to apologize," Collins said. "It's another thing to sit down with the communities impacted by the War on Drugs, predominantly communities of color and ask, you know, 'should I become President, what can I do to repair the damage?'"