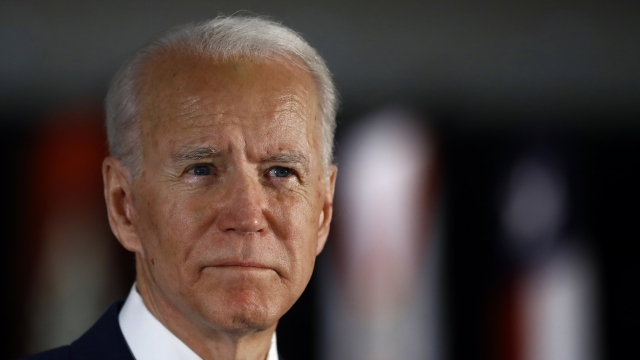 SMS
Joe Biden Denies He Sexually Assaulted Ex-Senate Aide Tara Reade
By Shira Tarlo
By Shira Tarlo
May 1, 2020
He also called on the National Archives to release any evidence of a complaint made against him by former Senate aide Tara Reade in 1993.
SHOW TRANSCRIPT

Responding to mounting pressure, Joe Biden on Friday broke his silence on allegations he sexually assaulted a former Senate aide.

Reade says Biden assaulted her in 1993 when she was a staff assistant in his office. She first made the claim publicly on a podcast in March.

Biden's campaign had previously denied the accusations, but the former VP had been silent on the issue until now.

Parts of Reade's claims have been corroborated in media reports, including by her neighbor in the '90s who told Business Insider she remembers Reade telling her of the assault a few years after it happened. Reade's brother and a former colleague have also backed up the allegations.

And last week, a 1993 clip of "Larry King Live" featuring an anonymous caller asking for advice after an alleged sexual assault resurfaced. Reade identified the voice as her mother, who died in 2016.

Reade also said she complained to three supervisors in Biden's office about the assault. All three told the New York Times they don't remember any complaints. Biden's executive assistant at the time also denied the allegation.

Reade has also said she filed a complaint in 1993 with the Senate personnel office. Biden said he was unaware of any report against him.

He has said such a complaint would be kept in records at the National Archives and called on the Secretary of the Senate to ask the archives to identify any record of the complaint and make it publicly available. Biden refused to approve a similar search of his senatorial papers, currently under seal at the University of Delaware.

Biden's political rivals have accused him of hypocrisy, pointing to his 2018 defense of Dr. Christine Blasey Ford during the confirmation of Supreme Court Justice Brett Kavanaugh.

"Why is it real for Dr. Ford but not for Tara Reade?" Brzezinski asked Biden on Friday.

The former vice president has faced claims of unwanted hugging and other physical contact. Last year, he addressed complaints from women who said they considered his behavior inappropriate.

"Social norms have begun to change — they've shifted. And the boundaries of protecting personal space have been reset, and I get it," Biden said in a video shared to his Twitter page.