Jimmy Fallon's New Sportswear Line Is In The Pits 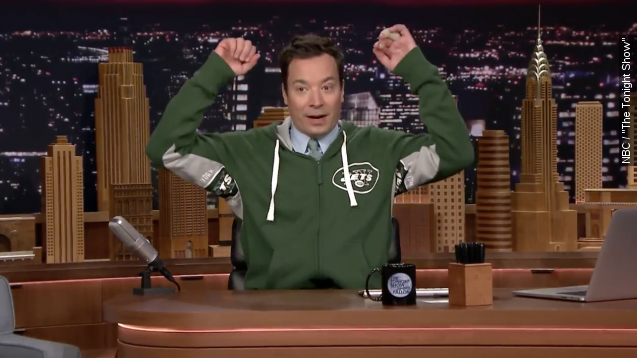 SMS
Jimmy Fallon's New Sportswear Line Is In The Pits
By Cody LaGrow
By Cody LaGrow
October 15, 2015
Jimmy Fallon thought you'd like the underarms of your clothing to show everyone where your team allegiances lie.
SHOW TRANSCRIPT

When it comes to Jimmy Fallon, you tend think of funny before you think of fashion.

But today, Fallon is a regular Tim Gunn — creating a line of sportswear focused on the armpit.

"My idea is basically this. Say you're at a big game. What do you do when your team wins? Or scores a touchdown? Or a big moment? Or makes a great play? You do this right? Yeah. So that's when I realized, why isn't there anything here?" asked Jimmy Fallon.

Fallon originally called the idea "Pitz" — with a "z" to keep it young and modern, but his friends at apparel giant G-III suggested the name "Hands High," and apparently, the concept is a home run.

Fallon's audience all got some garb and triggered the mad rush of sports fans nationwide to grab themselves a pit-decorated sweater that features professional team logos from the NFL, NBA, MLB and NHL.

The web traffic was so high, the site shut down. Fallon showed his excitement on Instagram saying: "We broke it! Hands High!"

No worries to those who still want to root for the home team with your underarms. The site is back up and running, so you can embellish those armpits of yours, hopefully, before your team is out of the playoffs.