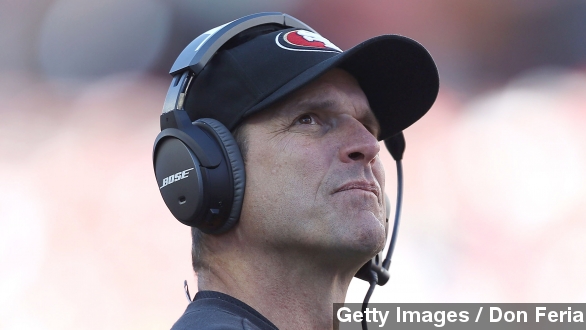 After weeks of speculation within the NFL ranks, the San Francisco 49ers and head coach Jim Harbaugh have agreed to part ways.

Following the 49ers' 20-17 victory over the Arizona Cardinals Sunday, 49ers CEO Jed York released a statement that read, in part, "Jim and I have come to the conclusion that it is in our mutual best interest to move in different directions."

The team also thanked Harbaugh for restoring a winning culture back to their football franchise.

"Been the time of my life. Been a lot of great memories, great moments," said Jim Harbaugh.

Harbaugh was pretty dead set on using his post-game interview to return the thanks to 49ers personnel, but one reporter was quick to ask the question we've all been wondering — which he ducked accordingly.

"Jim, do you expect to be the next head coach at Michigan?" asked a reporter.
"There'll be announcements made concerning those things," said Jim Harbaugh.

Even though Harbaugh himself hasn't said exactly where he'll end up just yet, multiple outlets report a return to his alma mater at the University of Michigan is pretty much a done deal and could happen as soon as early this week.

And, according to NFL Insider Ian Rapoport, sources say Harbaugh is set to sign a 6-year, $48 million contract to replace recently-fired Brady Hoke as head coach for the Wolverines.

If this deal pans out, it would make Harbaugh the highest paid coach in college football at $8 million a year. Alabama's Nick Saban currently tops the list among college coaches at $7.16 million a year.

Harbaugh leaves San Francisco with quite a bulked up resume. Under his four years as head coach, the 49ers went 44-19-1 and made it to the NFC championship three times, including one Super Bowl appearance.