Jim Harbaugh Could Be CFB's Highest-Paid Coach, If He Wanted 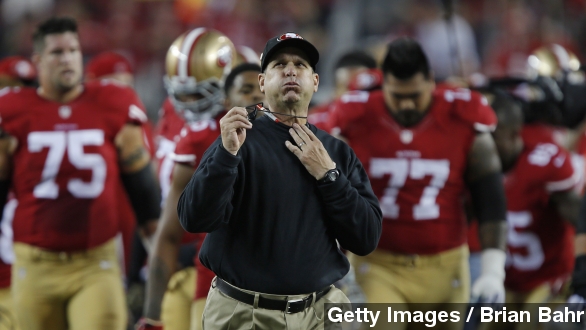 SMS
Jim Harbaugh Could Be CFB's Highest-Paid Coach, If He Wanted
By Matt Moreno
By Matt Moreno
December 18, 2014
Reports say 49ers head coach Jim Harbaugh will likely be out of his current job at the end of the year and could land at the University of Michigan.
SHOW TRANSCRIPT

Jim Harbaugh will soon be out as the San Francisco 49ers head coach. While that's not official, that seems to be the widely reported belief.

And soon, he could be on the sidelines for the University of Michigan.

Michigan fired Brady Hoke at the beginning of the month, and Harbaugh, who played quarterback for the Wolverines in the '80s, reportedly has quite the disconnect between him and 49ers upper management.

Which is likely why Harbaugh and Michigan are being linked so quickly.

Now, both the NFL Network and ESPN are reporting Harbaugh is being offered a record $8 million per year contract to become Michigan's head coach.

Which, if true, would immediately put him at the top of the college coaching ranks monetarily, beating out current top-paid coach Nick Saban of Alabama.

Which is pretty bold when you compare the two's college coaching resumes.

Nick Saban has been a college coach for 19 years now, with Michigan State, LSU, and now Alabama. He also spent a year at Toledo. Harbaugh, on the other hand, has seven years of NCAA coaching experience, four of them with Stanford.

To that point, Saban is one of the winningest coaches in college football history when it comes to the national championship game. Here he is hoisting up his third with Alabama. This year, he's got a chance for his fourth with the Crimson Tide and fifth overall.

Harbaugh, though, has zero. None. Zip. The best he has is a win in the 2011 Orange Bowl with Stanford. And this is the guy who could be the richest coach in NCAA history? (Video via Orange Bowl)

Well, the 49ers have been really good under Harbaugh. The team had three straight playoff appearances under him including three NFC Championship appearances and one in the 2013 Super Bowl. The 49ers will break that streak this year though.

But according to several outlets, it will take more than money to woo Harbaugh.

"The money at Michigan is great, but it isn’t likely Harbaugh’s motivation. He could get money just about anywhere. A Super Bowl is far more precious," USA Today writes.

Sporting News says: "I’ve never seen a coach who, more than anything, relies purely on preparation and gut instinct. ... Michigan could offer $10 million a year and it wouldn’t make any difference in Harbaugh’s decision. Right now, it’s all about preparation."

And Michigan isn't Harbaugh's only option. The coach is also rumored to be a possible trade candidate to other NFL teams.

And Harbaugh isn't Michigan's only option either. LSU's Les Miles, also a Michigan man, has been linked to the job as well, just like he was in 2007 before they hired Hoke.

Although The Times-Picayune reports Miles told reporters he's not seeking out the job this time.

Michigan is not commenting on the reports.