Jill Stein Officially Files For A Recount In Wisconsin 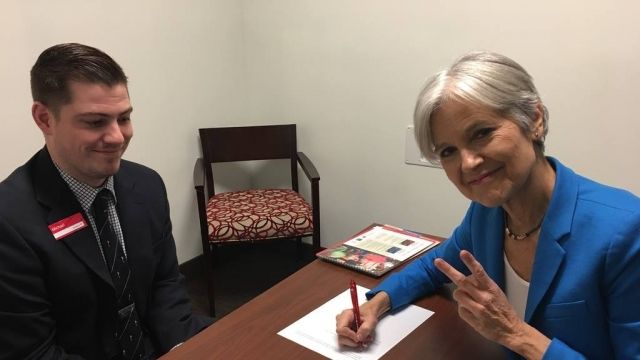 SMS
Jill Stein Officially Files For A Recount In Wisconsin
By Grant Suneson
By Grant Suneson
November 25, 2016
The Green Party presidential candidate filed the request just a half hour ahead of Friday's deadline.
SHOW TRANSCRIPT

The 2016 presidential election still isn't over.

Green Party candidate Jill Stein officially filed a request for a recount in Wisconsin, just a half hour ahead of Friday's deadline.

After announcing recall efforts, Stein crowdfunded more than double her initial goal of $2.5 million to pay the filing and legal fees she says is needed to initiate a recall in Wisconsin, as well as Pennsylvania and Michigan.

Stein said she's requesting a recount because "reported hacks into voter and party databases and individual email accounts are causing many American to wonder if our election results are reliable."

But Stein is unlikely to benefit from her efforts. Her ticket got just 1 percent of the popular vote — nowhere near winning, or even the 5 percent support needed to get federal funds for future Green Party candidates.

There's also no reason to believe the recall will change anything. We simply don't have any evidence that votes were stolen or tampered with on a wide enough scale to actually influence the election.