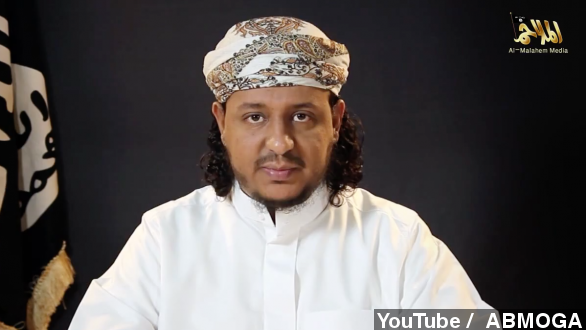 By Jake Godin
November 22, 2014
Jihadist politics can be fickle. AQAP released a video condemning an ISIS claim that it now controlled territory outside of Iraq and Syria.
SHOW TRANSCRIPT

Even jihadist movements have to worry about politics, and that includes ISIS and Al-Qaeda.

According to The Long War Journal, what he’s saying translates to a condemnation of ISIS for over-reaching with its authority. Rejecting the idea of an ISIS Caliphate, he says it’s also causing divisions amongst jihadists. (Video via YouTube / ع ABMOGA)

It's a response to an audio recording released by Baghdadi last week. In it, the would-be Caliph accepted pledges from jihadists in Algeria, Egypt, Saudi Arabia and Yemen and said other jihadist movements in those countries were now void. (Video via YouTube / Sada Tunisie)

The recent fighting words from AQAP are a bit confusing, considering the Al-Qaeda branch announced support for ISIS in August. But according to one fighter, that support was only for its fight against the West, not for its killing of other Muslims.

That hesitant support of ISIS may in part be because AQAP’s leader is Al-Qaeda’s second in command. And Al-Qaeda renounced all ties to ISIS in February. (Video via YouTube / Ahl Althogor)

But now with Baghdadi trying to assume control over jihadists in Yemen, he’s forced AQAP to more publicly side with its parent organization.

CNN notes this could prove to be problematic for AQAP, increasing the likelihood of splinter groups who support ISIS forming within AQAP. But it’s also a blow to ISIS as it attempts to win over jihadists from Al-Qaeda.

Still, other groups have pledged loyalty to ISIS in the past months, most recently a dangerous Egyptian militant group based out of the Sinai peninsula earlier in November. (Video via YouTube / قادم كالسي)

And ISIS has reportedly managed to sign a tentative truce with Jabhat Al-Nusra, one of its biggest jihadist rivals in Syria. (Video via YouTube / شبكة مراسلي المنارة البيضاء 2)

AQAP currently controls a large amount of territory in Yemen and has been subject to numerous U.S. drone strikes.