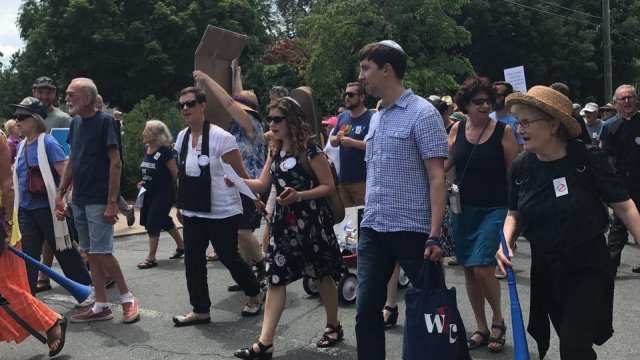 SMS
Jews in Charlottesville Faced A Summer Of Anti-Semitism

By Alexandra Miller
September 1, 2017
Jews in Charlottesville, Virginia, say they feared for their safety after Nazis rallied there. But the interfaith community comforted them.
SHOW TRANSCRIPT

As Jews prayed Friday night and Saturday morning, Nazis marched in the streets. In many other ways, the congregation was cradled by the community.

The interfaith community in Charlottesville was visible throughout the weekend during those rallies. They held services at churches around town Friday and Saturday, and some non-Jews stood outside the synagogue in solidarity.

Even with all that support, members of the synagogue were faced with something they never thought they’d see in 2017.

Geoff Schmelkin, a member of Congregation Beth Israel, said while he and other members were inside the sanctuary praying that Saturday morning, they couldn't see or hear what was going on outside. As soon as services let out, it was apparent their safety was in jeopardy.

"We're standing there at 11:30, and someone points out, and there's a group of racists coming down the street," said congregant Geoff Schmelkin. "I came to the window, and sure enough, you could see the skinhead types walking past the synagogue. It strikes a chord for Jewish people to see those things on the streets outside the synagogue. For a lot of Jews, it's our worst nightmare come true." 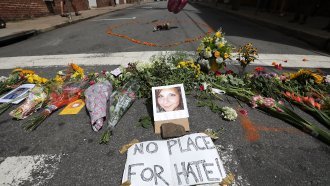 They were told they shouldn't leave through one of the main entrances but instead needed to exit through the back. Schmelkin said when he walked out those doors, people were driving by, spitting on the ground. Armed men stood outside the synagogue for hours. People walked by chanting Nazi victory salute, "Seig Heil." The synagogue requested an officer stand outside but their request was denied. Instead, they chose to hire an armed security guard. They eventually decided to cancel the rest of the day’s services as a safety precaution.

Rachel Schmelkin has been a rabbi in Charlottesville for about a year. For the past few months, she lead her congregation in ways she says she never expected. Racism and anti-Semitism have plagued the small town tucked away in the southwest Virginia mountains. Suddenly, she and the other leaders of Congregation Beth Israel were faced with a heartbreaking decision. They decided to remove their torah scrolls, the centerpiece of Jewish life, from the synagogue. This includes a torah recovered from the Holocaust.

They heard Nazis were planning to take over their town. That preemptive measure turned out to be a smart one. Nazi websites had posted calls to burn down the synagogue. But that didn't happen. Still, even the threat struck a chord.

Although the rabbi has heard so many upsetting stories, she says some are also uplifting. Schmelkin says many non-Jews in her community have been supportive.

"If the story that we tell is only about how scared and petrified we were on Friday and Saturday, then we're letting these people win," she said. "But actually we've won because we've done exactly what they wouldn't want us to do, which is come together and be unified."