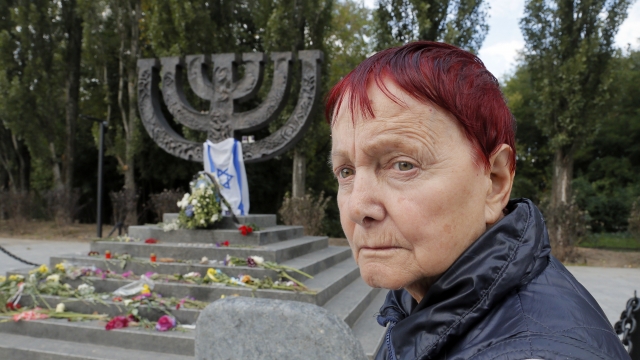 According to Ukrainian authorities, a rocket attack on Kyiv's main TV tower Tuesday also hit nearby Babyn Yar, which is a site where Nazis executed more than 33,000 Jews in two days in 1941.

Northwestern University professor of Jewish history Yohanan Petrovsky-Shtern was born and raised in Kyiv. Two of his relatives were killed at Babyn Yar during World War II.

"They shot them all one by one, performing what is known as the 'Holocaust by Bullets,'" Petrovsky-Shtern said. "It is a holy place for me and my family members in Kyiv."

He says Tuesday's Russian strike on the Holocaust memorial, which reportedly damaged a Jewish cemetery, brings back painful memories. Memories of a time when Soviet censorship and antisemitism tried to rewrite the history of what happened there.

"The Soviet censorship did not allow Jewish relatives to put the word[s] 'Jewish victims' on the memorial," Petrovsky-Shtern continued. "Any kind of mentioning of specific Jewish suffering was erased from the Soviet memory."

"What he does to Babyn Yar is exactly the same he does to many other historical, cultural, socially important buildings in Ukraine," Petrovsky-Shtern said.

The memorial is just one of many cultural heritage sites at risk of getting hit as Russia escalates its attacks on Ukrainian urban centers.

"Ukrainians have entire cities that are built in the 15th-16th centuries that are older and more beautiful than Moscow. And they are endangered," Petrovsky-Shtern continued. "So Putin claims that Ukrainian culture does not exist, and in order to justify his claim, he might be willing to erase these cities."

A museum about 50 miles from Kyiv was destroyed over the weekend. The Ministry of Foreign Affairs says 25 paintings by noted Ukrainian artist Maria Primachenko were burned.

There are seven world heritage sites in Ukraine and experts are warning of an "unfolding cultural catastrophe."

Petrovksy-Shtern says his 87-year-old mother has been hiding in a bomb shelter under a school in Kyiv. But like many of her fellow citizens, she wants to stay put despite the danger.