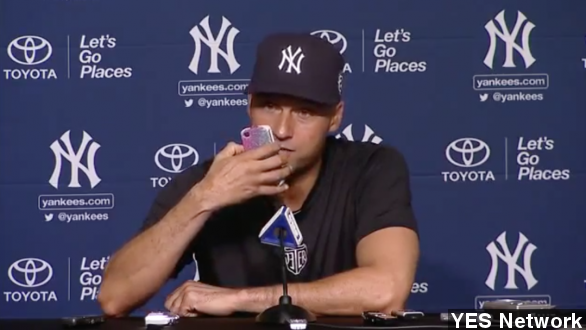 By Cliff Judy
September 8, 2014
During his postgame press conference Sunday, Jeter saw a cellphone vibrating in front of him and decided to talk briefly to a reporter's husband.
SHOW TRANSCRIPT

Nearly 50,000 attended Sunday's Yankee game in the Bronx for Derek Jeter Day, one of his last home games before the shortstop retires. But the future Hall of Famer made just as many headlines for what happened after the game.

DEREK JETER ON WCBS: "Someone's phone's ringing. Walt Rheinheimer. Want me to get it? Hey, Walt, she'll have to call you back, buddy."

That would be Walt Rheinheimer, husband of The Record columnist Tara Sullivan. Sullivan, of course, included the phone call in her column for Monday morning's paper.

For the record, Sullivan tweeted she was supposed to meet Walt and their daughter at a family friend's birthday party later on Sunday, and he was just trying to make sure she had the friend's gift.

You can be sure he never expected to talk to one of the most famous Bronx Bombers of all time.

Jeter's day was pretty much full of moments like that. By the way, that's Cal Ripken, Jr., Dave Winfield and Michael Jordan standing in the background of his pregame speech.

During that speech, which some outlets noted Jeter was uncharacteristically receptive of praise, the shortstop said: "In my opinion, I've had the greatest job in the world. I've had a chance to be the shortstop for the New York Yankees — and there's only one of those."

Remind you of anyone? Maybe the man considered one of the best first basemen of all time?

LOU GEHRIG, NEW YORK YANKEES FIRST BASEMAN VIA ESPN: "Today, I consider myself the luckiest man on the face of the Earth."

Back to No. 2, Jeter also unwittingly ran to his position alone to start the game so the crowd could give him an ovation with him as the only player on the field.

It's Yankee tradition for the team captain to lead the team onto the field to start each game, but NJ.com reports teammate Chase Headley came up with the idea to fake Jeter out. Jeter said: "First thought was I messed up and ran out there too early on accident. But I appreciate my teammates doing that for me."

The Yankees lost the game 2-0, but again — most everyone remembered a largely unmatched career, the pregame ceremonies to honor Jeter and the Yankee great's postgame humor.

Sullivan presumably recovered her cellphone from the Yankee great and then tweeted late Sunday night: "From now on, airplane mode. I promise."