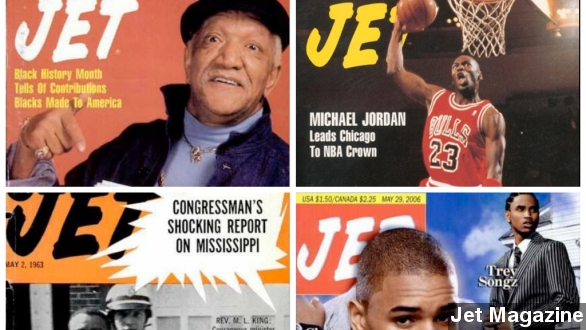 By Jamal Andress
May 7, 2014
After more than 60 years, JET magazine is ending its regular print edition and moving to an all-digital magazine app and website.
SHOW TRANSCRIPT

Ebony, Essence and JET magazine: three publications that have been covering the black experience and black issues for more than 40 years. Now for the first time, one of them will be moving to an all-digital format, scrapping altogether its iconic print covers.

After more than 60 years, JET magazine is ending its regular print edition and moving to an all-digital magazine app and website.

JET tweeted out the news Wednesday, saying "We're proud to announce that JET magazine will transition from a print publication to a new weekly digital app!"

It's an understandably positive spin on what's almost certainly bad news. In recent years, JET magazine, along with its parent company Johnson Publishing, has suffered declines in circulation and revenue.

The New York Times reports, to cut costs JET magazine reduced the weekly publication to every three weeks. And now the black magazine will only print an annual "Best of Jet" edition.

And while, the financial struggles surely played a role in the decision to go digital, JET's CEO says the digital platform is just the natural next step for the magazine.

"Almost 63 years ago, my father, John Johnson, named the publication JET because, as he said in the first issue, 'In the world today, everything is moving faster.' ... He could not have spoken more relevant words today.  We are not saying goodbye to JET, we are embracing the future as my father did." (Via Jet Magazine)

You could argue that this shift to digital has actually been a long time coming for the magazine. Back in 2011 J.P. Morgan invested "tens of millions of dollars" in the historic magazine, and even then JET's CEO said the money would be used to "give a fresh look to Jet ... on the web." (Via The Wall Street Journal)

Also, JET magazine joins many other notable publications that have cut down or stopped printing altogether to focus exclusively on digital.

JET magazine was founded in 1951 by John H. Johnson, the man behind Johnson Publishing and the most circulated black magazine in America, Ebony. JET gained notoriety for its extensive coverage of the Civil Rights Movement, earning the catchphrase, "If it isn’t in JET, it didn’t happen."