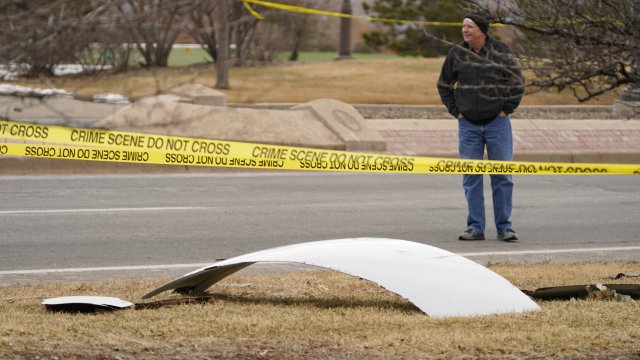 SMS
Jet Engine Failure Drops Plane Parts in Denver-Area Front Yards
By Alex Arger
By Alex Arger
February 21, 2021
A right engine failure caused the grounding of a Boeing flight, injuring no one aboard or on the ground.
SHOW TRANSCRIPT

From the sky over Denver... falling aircraft debris...onto a suburban neighborhood.

Engine failure forced the Honolulu-bound  Boeing 777-200 to return to Denver International about 20 minutes after take off.

No one hurt — on board or on the ground.

But large chunks of plane lying in fields and in front yards. One piece narrowly missed a home.

"This park on a day like today, when it's not as cold as it was last weekend, we could have hundreds of people here," Broomfield Police PIO Rachel Welte said. "And the fact that we are still not getting reports of any injuries is absolutely shocking at this point. It's amazing."

Eyewitnesses heard a loud noise and saw the plane on fire flying over the suburbs.

"I heard this loud rumble and I thought it was a military aircraft because it was really, really loud. It came right over the house and I watched it and you could see that that the right engine was on fire."

Now the National Transportation Safety Board is investigating.