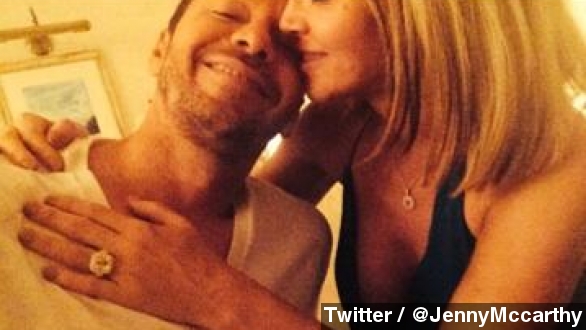 Jenny McCarthy and New Kids on The Block singer Donnie Wahlberg are engaged. Wednesday morning she broke the news on "The View."

Woah, wait a sec, did you see that rock? It's a yellow sapphire, gorgeous.

Before the announcement, McCarthy did drop a bit of a hint on Twitter, writing "Turn on #theview It's gonna be a goooood one. : )"

And afterward she wrote how grateful and blessed she felt. (Via Twitter / @JennyMccarthy)

During the show, she tearfully explained how Wahlberg popped the question — enlisting the help of McCarthy's son Evan who walked up to his mom...

41-year-old McCarthy and now husband-to-be Donnie Wahlberg, brother of Mark Wahlberg, have been an official couple since late 2013. (Via VH1)

Last fall she told People, "Our work ethic, I would say, is a huge characteristic trait that makes me attracted to him. He understands my work schedule and he has his and I get it and we're both single parents and he's trying to juggle all of that while I am too."

This will be ​the second marriage for both. Wahlberg has two sons from his previous marriage with Kim Fey. The two got divorced in 2008 after almost nine years of marriage. (Via E!)

And McCarthy divorced director John Asher in 2005 — they had Evan together, who's now 11-years-old. (Via Sundance Film Festival)

McCarthy said after Wahlberg proposed Evan yelled, "'I have another dad!' and it made all of us cry." (Via E!)

No word yet on wedding plans, although co-host of "The View," Barbra Walters did offer up her New York City apartment as a possible venue. But with one stipulation — no wedding night sleepovers.