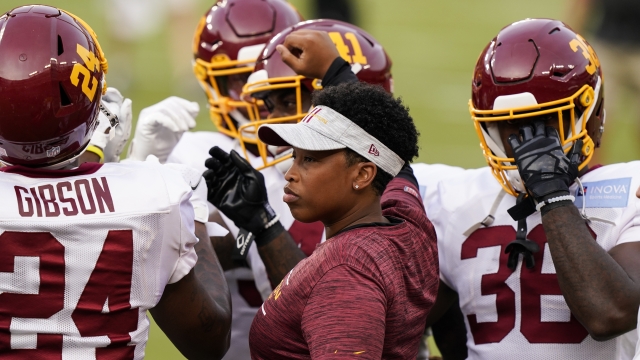 This Black History Month, Newsy is celebrating those who have made strides even in the face of adversity. We're highlighting assistant running back coach for the Washington Commanders, Jennifer King. Not only is King the first Black female assistant coach to be hired by an NFL team, this past season she became the first Black woman to act as a lead-position coach during an NFL game. She spoke with Newsy about her trailblazing career.

NEWSY'S LINDSEY TUCHMAN: Thank you so much for being here with us this morning. We just want to know first how you got to this point and what's your story?

JENNIFER KING: Yeah, thanks for having me. It's been a wild journey to get here. I started in college basketball and coached college basketball for about 10 years and ultimately met Coach Ron Rivera when I got my head coaching job in Carolina, and it kind of took off from there. So you know, I've had stops in Carolina twice, at Dartmouth, in Arizona and now entering year three in D.C.

NEWSY'S ROB NELSON: What do you think it means for other folks of color to see you — particularly young women, young girls of color — to see you in this position.

TUCHMAN: Yeah, that's exceptionally important. And there's has been a lot of news, though. So your team recently went under a name change, now known as the Washington Commanders. How do you feel about this decision finally being made?

KING: It feels good. You know, obviously it's a tough decision and you can't make everybody happy with the decision, but I'm happy with it. And I think, you know, we're ready to go into a new era and I think our uniforms look really good. So that's exciting. But we're ready to go.

NELSON: It should be an exciting season for a lot of reasons. And listen, you know, the NFL obviously has been in the news lately dealing with some diversity issues. I'm just curious as to how you see your role in that and how you would describe the league's efforts in terms of diversity beyond players, but folks like you in the coaching and management ranks.

KING: I think, obviously, there's always work to be done. The league has a women in football forum put on by Sam Rapoport, which helps identify women who want to work in football, and it's not just coaching, but all aspects of the business. But you know, obviously on the coaching side, there's a lot of work that needs to be done for diversity. I'm excited to be kind of at the ground level now, hopefully a new era. You know, there's things that need to be adjusted with how we're hiring people, but I think that the league is committed to it and hopefully we can get all the ownerships and everything available as well.

NELSON: Very cool. And now back to the game that you love. For those of us who love football, but don't, you know — at 5’8” I was never going to be a real threat on the field — so for those of us who love the game, but don't know quite how it works for someone in your position as a coach, what is your daily flow like once the season really gets cracking over the summer?

KING: We have really long days. I think that's something people don't realize. They only see us playing games, but I mean we work 16 hours a day sometimes — more just to make sure we're prepared for Sunday. So it's a lot of work that goes into what we do and super-long days, so it's not glamorous at all. When you see us at the game, you know, we had a long week before that.

TUCHMAN: Yeah, and speaking of a long week, there are some people getting ready for an exciting game on Sunday. The Cincinnati Bengals take on the L.A. Rams in the Super Bowl. We've got to know who you're rooting for.

KING: I guess being in the league, I don't really have a preference. I have friends on both sides so I really just want to see a good game. We had Super Bowls kind of get out of hand lately, so hopefully we'll have a nice game and you know, I wouldn't mind seeing it end on the last play. I just want to be entertained.

NELSON: And I assume this time next year we'll be talking about the Commanders' Super Bowl appearance in Super Bowl LVII. Right?

KING: I like that. That sounds good to me.

NELSON: All right. Jennifer King, assistant running backs coach for the Washington Commanders, thanks so much for being with us. We appreciate it. Best of luck to you and to the team.