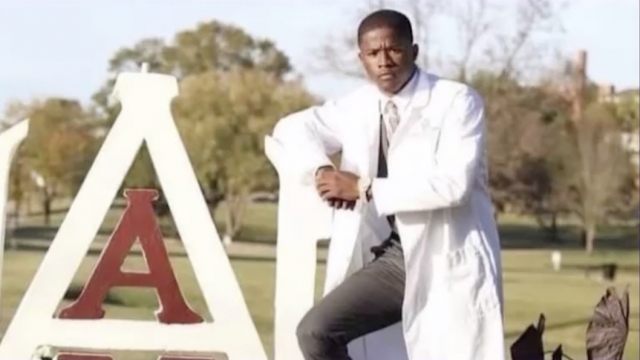 SMS
Jelani Day's Mother Asks Bloomington Police To Give Phone To FBI
By Newsy Staff
By Newsy Staff
November 11, 2021
The 25-year-old graduate student was last seen Aug. 24. His mother, Carmen Bolden Day, is asking the FBI to take over the case.

NEWSY'S CHANCE SEALES: "Newsy Tonight" is continuing to follow the disappearance and death investigation of graduate student Jelani Day. Thursday saw a major development in the case and has Jelani's family and friends hopeful for new information and somewhat skeptical of police. Jelani, an Alabama A&M graduate and an Illinois State University grad student was last seen at Beyond Hello Cannabis Dispensary in Bloomington, IL on Aug. 24. His vehicle was found just two days later in a wooded area in Peru, Illinois, nearly 60 miles away. On Sept. 4, an unidentified body was found in the river in LaSalle County, Illinois. It was determined to be Jelani on Sept. 23. On Oct. 26, police told the public Jelani's cause of death was drowning with no signs of homicide. Throughout this investigation, Jelani's cellphone has been missing, along with any clues it might hold. Now, his mother says it's been found, it's in police custody and Jelani's family wants a say in the upcoming process. Someone who's been leading the fight, pushing for answers surrounding Jelani's disappearance and death is his mother, Carmen Bolden Day, and she joins us again. Carmen, since we began talking — a few months ago at this point — a big question always lingered in our conversations: Where is Jelani's cellphone? What clues could it hold? And now you tell us the Bloomington, Illinois, police have it?

SEALES: Can you explain how it came to be in their custody? Because you wrote on Facebook about this, that apparently a guy says his friend or acquaintance found it on the side of the road, turned it in at Walmart, they took it to police — it's this really convoluted chain of custody.

DAY: Well from what I understand, the gentleman was going down the interstate and a mattress fell off the back of his truck. He stopped his truck to secure the mattress back on the truck. He found a phone. He said that the phone had been shattered. He ended up taking it to a kiosk at a Walmart because he said that the phone didn't work. He took it to a kiosk at Walmart. He received $80 for the phone. He did this on Oct. 17. Today is November the 11th. I found out about the phone, that the phone had been found and had been identified as Jelani's phone early this morning, maybe about one or two o'clock this morning. However, the young man had let me know that he got questioned two days ago. So, the police have been aware of this, they've known about the phone. They have not made me aware. According to Peru [police], in Bloomington, the FBI is assisting and providing resources. When I contacted them today, they told me that they didn't tell me about the phone because they wanted to be sure. They then told me that they were going to look into Jelani's phone to see what was on there. I questioned why they would go through the phone and she said to me, "Carmen, if you don't want us to go through the phone let me know now and we'll turn it over to the FBI," and I told her that's what I prefer for her to do. So, if they can turn it over to the FBI and not mess with it — because at this point, I need the FBI involved. I need them to not provide oversight, not to be engaged but to take over this case.

DAY: The area that the young man described the phone found in, was the same area that I originally had searched that exit. I didn't search that area, but the exit that the road leads to get off on that, I was there and I had told the police that that is an area that needs to be looked at, cameras need to be looking at that on that road.

SEALES: That was in Bloomington?

DAY: That was in Bloomington. I had spent an entire day looking, going to different businesses. Actually I found a Dollar General in that area that let me sit in that store for four hours to watch their cameras where I believe I saw Jelani's car and I did let the police know that I saw that exit that was on that road and I wondered is this a way that my son's car could have went. I made all of those concerns aware to the Bloomington police.

SEALES: This kind of falls into a pattern, I think is what you're saying. Someone else finds the phone, someone else found the car, his clothes, his wallet, that it's just been very piecemeal and different people involved. You do not want the police to search Jelani's phone. Why is that?

DAY: Because I don't trust them at this point. If you look at how the evidence has been found: The car is found in one place, I'm told about the different people that found the car, then it's the wallet that is found and they say it's Jelani that walked, but there's a man and his son that found the wallet. Then, two bored young ladies from ISU go looking for Jelani and they find his clothing by a river bank. And now, the phone is found on the interstate. Nothing adds up. Nothing adds up. And then all it tells me is that me and my prayers and people that are around me that are listening and wanting to find answers too are the only ones that are looking for answers. So, at this point things are just falling into the laps of the police. So no, I don't trust the Peru police. I don't trust the Bloomington police. I don't trust the LaSalle police. I need the FBI to come in and take over.

SEALES: In the past, I know you've been really upset saying you felt like the police were not doing enough. I think you called them lazy online saying they're lazy law enforcement. Now it seems like they're insisting that they will own this investigation, that they will search the phone or possibly turn it over to the FBI. Is there a tug-of-war developing here?

DAY: I'm not trying to create a tug-of-war because I've always been that parent that has wanted to be cooperative, compliant, not be viewed as "the angry Black woman." But now, as I sit here, I feel as if those are things I should have done from the gate because now I am angry. I'm very angry.

SEALES: And nobody has been more forceful on this than you. You've been Jelani's biggest advocate. We know that there has been no one coming forward with the critical information you've been wanting. You know, "Where was he? What happened?" Are there any other gaps that you need filled in tonight that maybe people could help with?

DAY: If people could just — we know that the last place that he was seen was in the Beyond Hello [dispensary] area. His phone last pinged at 9:20 a.m. Now that I know that this phone was found on the side of the interstate — those businesses that are located off of that East Main Street in Bloomington, Illinois — If they can recall, if anybody can recall on Aug. 24 being in that area, seeing his car, seeing him — if they have any information, please, please contact the FBI, contact the authorities, contact me. I made myself open on social media. I am trying to do everything I can to find out what happened to Jelani. It is important to me to know what happened to Jelani.

SEALES: You have been his greatest champion and you've come on here night after night and spoken out night after night. And I really appreciate it. We told you we were going to stick with you through this case, and we will.

DAY: Well I appreciate you for keeping your word and sticking with me. I really do.

Before talking with Carmen, "Newsy Tonight" did reach out to Bloomington, Illinois, and Peru, Illinois, police departments. Neither has returned the calls.