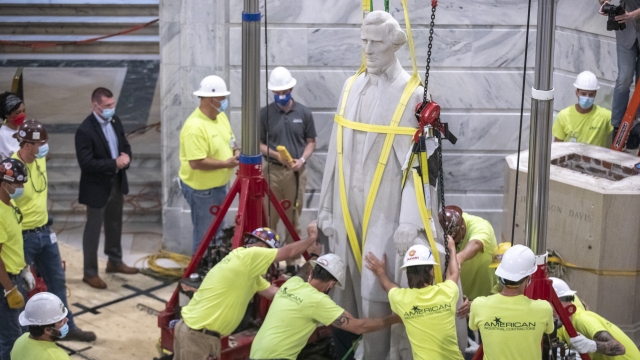 The state Historic Properties Advisory Commission had voted 11-1 to remove the statue and relocate it to a historic site in southern Kentucky.

A statue of Confederate President Jefferson Davis has been removed from the Kentucky capitol building.

Gov. Andy Beshear on Friday pushed the final button required for the statue to be removed from its pedestal in Frankfort, a move he called "a step forward" for all Kentuckians.

"The Kentucky State Capitol no longer houses a symbol of division," he tweeted.

The 12-foot Davis statue in Frankfort — representing the leader of a government fighting to continue slavery — had occupied the Capitol since 1936. It will be relocated to a historic site in southern Kentucky — where Davis is from.

The statue's removal follows another Jefferson Davis statue being toppled by protesters in Richmond, Virginia.

The removal of statues has become a hot-button issue as protests against racial inequality continue across the country. In Kentucky, many are protesting the death of Breonna Taylor, a Black woman who was killed in March after Louisville police entered her apartment and shot her eight times while serving a no-knock warrant.