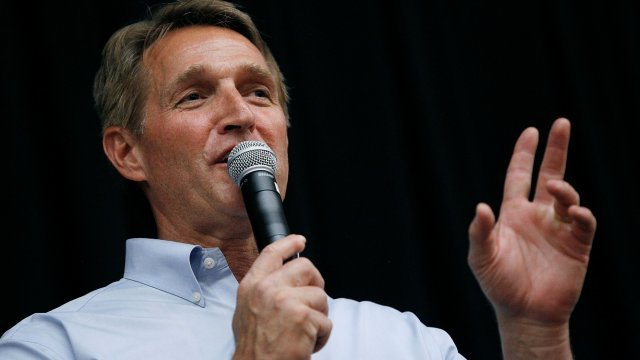 SMS
Flake To Condemn Trump's Attacks On Media Before 'Fake News Awards'
By Gabrielle Ware
By Gabrielle Ware
January 15, 2018
Sen. Jeff Flake says the truth was "more battered and abused" in 2017 than ever before in America's history.
SHOW TRANSCRIPT

Republican Sen. Jeff Flake is giving a speech Wednesday in which he'll reportedly criticize President Donald Trump's attacks on the media — and he plans to do it before Trump announces winners of his "Fake News Awards."

Flake released some excerpts of the speech to The Washington Post. In them he says "2017 was a year which saw the truth — objective, empirical, evidence-based truth — more battered and abused than any other in the history of our country, at the hands of the most powerful figure in our government."

The excerpts also berate Trump for describing the press as the "enemy of the American People" in a February tweet. Flake notes a version of that phrase was previously uttered by former Soviet dictator Josef Stalin. 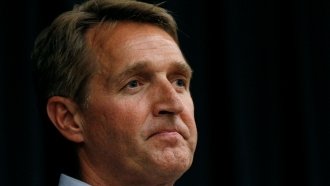 Former Soviet leader Nikita Khrushchev denounced the term, noting Stalin used it "for the purpose of physically annihilating" people who disagreed with the lethal dictator.

To be clear, Flake told CNN he wasn't comparing Trump to Stalin, saying: "Josef Stalin was a killer. Our president is not. But it just puzzles me as to why you would use a phrase that is so loaded and that has such deeper meaning."

It's true the phrase doesn't exactly have the best track record.

One of its first mentions in politics was during the French Revolution. A revolutionary tribunal was set up where so-called "enemies of the people" were tried and sentenced — sometimes to death — for political crimes.

Chinese dictator Mao Zedong used the term when referring to those critical of his regime. His policies are thought to have contributed to China's Great Famine, which killed about 36 million people.