Jeb Bush On Foreign Policy: 'I Am My Own Man' 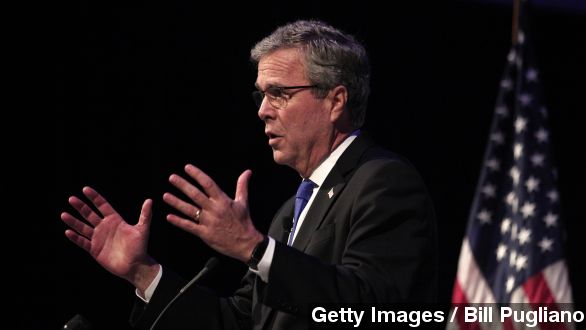 SMS
Jeb Bush On Foreign Policy: 'I Am My Own Man'
By Jamal Andress
By Jamal Andress
February 18, 2015
Many outlets have suggested the Bush legacy is one of the most important hurdles for Jeb Bush to clear if he wants a chance at the White House.
SHOW TRANSCRIPT

During a speech Wednesday, former Florida Gov. Jeb Bush tried to separate himself from the two men who made Bush a household name and who also made some highly criticized foreign policy decisions.

Jeb Bush's political action committee, Right to Rise, pre-released his remarks for Wednesday's speech in front of the Chicago Council on Foreign Affairs. Bush said: "I love my father and my brother. I admire their service to the nation and the difficult decisions they had to make. But I am my own man – and my views are shaped by my own thinking and own experiences."

As many outlets have alluded to, the Bush legacy is one of the most important hurdles for Jeb Bush to clear if he wants a chance at the White House in 2016.

The George W. Bush administration invaded Afghanistan in 2001 after the 9/11 terrorist attacks. The war in Afghanistan would go on to be one of the most expensive wars in American history.

"To disarm Iraq, to free its people and to defend the world from grave danger," then-President George W. Bush said in 2003.

The Bush administration also invaded Iraq in 2003 looking for weapons of mass destruction only to find there weren't any. Critics accused the administration of ignoring signs Iraq clearly didn't have WMDs for the purpose of overthrowing Saddam Hussein.

With both of these things irrevocably attached to Jeb Bush as he sets himself up for a 2016 presidential bid, Time calls the Bush name "one of his strongest assets and greatest liabilities."

Jeb Bush also criticized the Obama administration for its foreign policy, claiming the administration has been "inconsistent and indecisive" and has made America "less influential in the world." (Video via The White House)

This speech in Chicago comes just two weeks after a similar appearance in Detroit where Jeb Bush discussed the U.S. economy and income inequality, among other things.