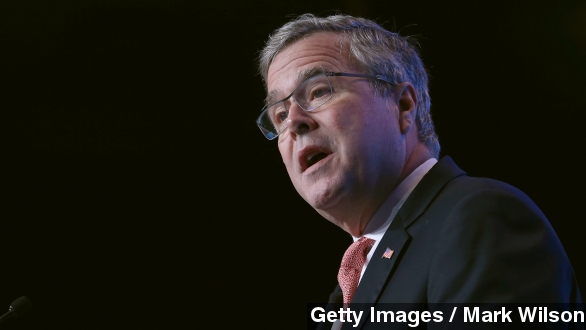 SMS
Jeb Bush Is (Kind Of) In For 2016
By Nathan Giannini
By Nathan Giannini
December 16, 2014
The former Florida governor and brother of the last President Bush announced he will "actively explore the possibility of running" for president.
SHOW TRANSCRIPT

"If I decide to run for office again, it'll be based on what I believe," Bush told CBN in a 2013 interview.

He's been part of the rumor mill pretty much since the last election, but until now he'd been pretty coy about his intentions.

The latest came from an announcement on his Facebook page saying he hopes to "have a conversation about restoring the promise of America."

Bush, of course, is related the the last two Republican presidents.

And the rumors had been heating up lately as Bush announced his plans to release 250,000 emails and write an e-book about his time as governor.

Bush announced those moves in an interview with Miami station WPLG, where he certainly sounded like a man preparing for a campaign.

"You can do big things. ... If you run with big ideas and then you're true to those ideas and get a chance to serve and implement them and do it with passion and conviction, you can move the needle."

Bush is the first major Republican to throw his hat in the 2016 ring. So what chance does he have of success in what is expected to be a crowded field?

According to a recent McClatchy-Marist poll, Bush has the support of 14 percent of Republican voters, trailing only former presidential candidate Mitt Romney at 19 percent.

Time magazine notes the announcement puts plenty of pressure on Florida Sen. Marco Rubio and New Jersey Gov. Chris Christie, "who share many of the same backers as Bush, to shore up their own donor support if they intend to run."