Jay-Z, Beyonce Rumored To Kick Off Joint Tour This Summer 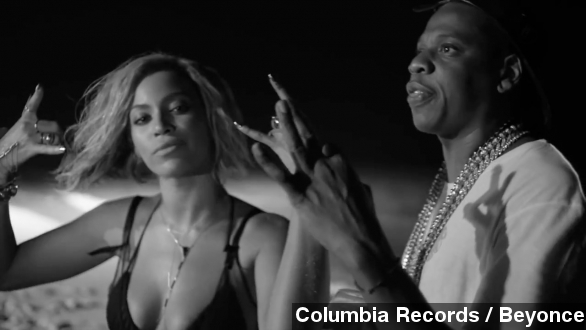 Call it the “Carter Concert of the Century” — this summer's hottest tour could bring together hip-hop power couple Jay-Z and Beyonce.

According to sources who spoke to Page Six, the husband and wife team will embark on a 20-stadium tour across the U.S., playing together and surely inciting riots on Ticketmaster.  The megashow is rumored to begin sometime in late June.

Magna. Carta. Holy. Crap. If the Carter collaboration is true, Page Six is hoping the duo will wind up in NYC for the Fourth of July festivities as well.

Vulture remains skeptical but admits, ​"We're taking it with a grain of salt, but with all the surprise album drops and surprise stage appearances, a surprise Mr. and Mrs. Carter tour isn't too far from the realm of possibility." (Via Vulture)

This would be the very first time they’ve ever toured as a husband-and-wife act, but it's hardly their first “shared” stage.

Starting back with Jay Z’s early album, The Blueprint 2, the hit “Bonnie and Clyde ‘03” first brought the pair together.

​More than a decade later, they’ve become “Drunk in Love” performing the single at high-profile shows including the Grammy Awards and a few of Beyonce’s concert tour dates this Spring.

The pair recently wrapped up separate tours for their latest albums — and the numbers are impressive.  According to US Weekly Jay performed 52 dates during his “Magna Carta Holy Grail” tour in January. Then in March, Beyonce finished her massive, 132-night “Mrs. Carter Show” tour, according to Hollywood Life.

Multiple news outlets including The Huffington Post and Billboard have reached out to reps for the Carters, but it looks like their camp will remain tight-lipped and we’ll keep our fingers-crossed.