Japan Says No More Nukes, But Its Military Push Is Unpopular 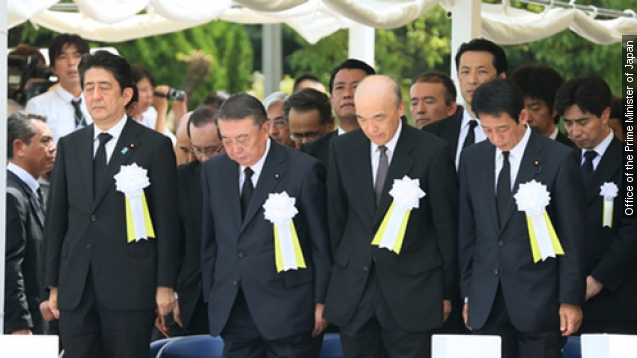 As Japan marked the 70th anniversary of the Nagasaki bombing, Prime Minister Shinzo Abe called for an end to nuclear weapons.

But that wasn't enough for one Nagasaki survivor, who used the occasion to criticize Abe for his push to boost the country's military. (Video via Fuji News Network)

According to The Asahi Shimbun, Sumiteru Taniguchi said: "The national security legislation being advanced by the government will lead Japan to war. ... We can never tolerate it."

His stance reflects a popular fear in Japan: that the legislation Abe is pushing through the Japanese legislature will compromise the country's pacifist constitution. (Video via The Wall Street Journal)

Abe says the legislation would allow the country to respond to "crises" more effectively, but analysts point to China's growing influence as the prime minister's main motivation. (Video via C-SPAN)

Either way, it's drawn considerable protest from the Japanese people, few of whom believe the country should take a more active military role in the region, according to a Pew Research poll. (Video via Arirang)

The legislation could open the door to Japan's Self Defense Forces taking combat role in international conflicts for the first time since its establishment following World War II. (video via Japan Self Defense Forces, U.S. National Archives)

Abe has already pushed it through Japan's lower house, and it's expected to easily pass the upper house, where Abe's party holds a majority. (Video via CCTV)

Still, even if Abe gets his way, it's not clear how he intends to implement the country's new military powers. (Video via Japan Ministry of Defense)

But if the devastating bombings of Hiroshima and Nagasaki are Japan's last memory of war, it's not surprising a majority of Japanese are against bringing the country closer to it. (Video via U.S. National Archives)