Japan's Shift From Pacifism Has Been A Long Time Coming 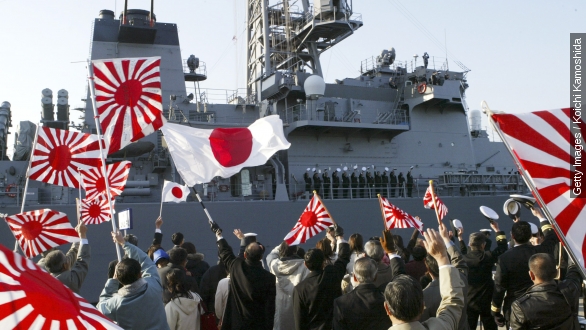 When Shinzo Abe becomes the first Japanese prime minister to speak before a joint session of Congress this week, he's expected to push for increased military ties between Japan and the U.S. (Video via Japan Ministry of Defense)

And while Abe's focus on the military has been seen as a new direction for historically pacifist postwar Japan, it's been building for a while.

Japan's self-defense forces had been obligated to engage only in — shockingly — self-defense, since their creation in the 1950s, and outside of a handful of peacekeeping missions, they've stayed out of military engagements — until 2001. (Video via U.S. National Archives)

When American forces deployed to Afghanistan in 2001, Japan sent naval tankers to the Indian Ocean to provide refueling for coalition warships. (Video via NBC)

Then in 2004, Japan put boots on the ground in Iraq, sending some 600 ground self-defense forces to aid in reconstruction efforts in the country's south. That deployment ended in 2006. (Video via Tokyo Broadcasting System)

So there was a lot of groundwork laid before Japan made arguably its biggest move to militarize in July, ending its self-imposed ban on aiding an ally under attack. But a big obstacle remains: public opinion. (Video via Arirang)

The most commonly cited reason for Abe's move to expand military capabilities is China's rise as a dominant regional power. (Video via RT)

But according to Pew Research Center polls published earlier this month, the overwhelming majority of Japanese people are against a military solution, with only 23 percent of those polled saying they wanted Japan to play a more active role in regional security.

Nevertheless, Japan has the backing of the U.S., which has long encouraged the country to normalize its military. So if Abe raises the issue of increased military collaboration before Congress on Wednesday, don't be surprised if he gets applauded. It's been a long time coming. (Video via The White House, NHK World)