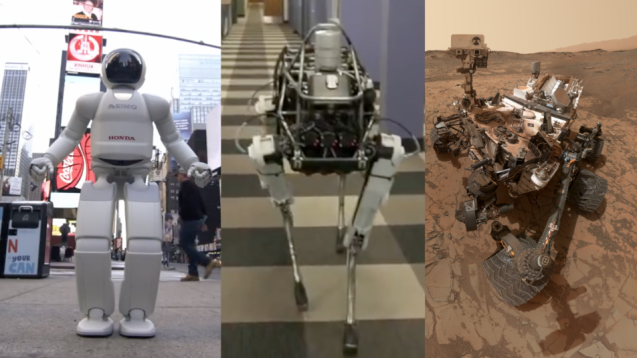 SMS
Japan's Henn Na Hotel Should Hire These Robots
By Christian Bryant
By Christian Bryant
July 19, 2015
The robot staff at the Henn na Hotel will need some help if the hotel expands — as planned. Here's our short list of robots they should hire.
SHOW TRANSCRIPT

Japan's Henn na Hotel is up and running which means now you can have robots tell you, "No, you can't extend your checkout another hour."

The hotel, which is located in a Nagasaki amusement park, is staffed by robots — like homeboy, homegirl and one of Chris Pratt's pets.

Only 72 rooms are available to the public, but the hotel hopes to double that by next year. If so, they're going to need to employ more machines that can move around — other than porter-bot. (Video via The Japan Times)

Assuming the Henn na Hotel is an equal opportunity employer, here's our short list of robots that should be offered jobs on the next round of hires.

Let's start with Honda's Asimo. First of all, why the hell isn't Asimo working there already? Asimo runs, climbs stairs and plays soccer for crying out loud! He'd be a hit.

There is at least one drawback, though. Hotel staff might have a hard time keeping Asimo on task because Asimo loves doing that hop-on-one-leg thing.

We're also recommending putting Pepper on the hotel staff. Pepper is a robot that reads facial expressions to tell how you're feeling and even tailor a conversation — and Pepper can do it in 17 languages. (Video via Aldebaran Robotics)

But Pepper is kind of a people pleaser. That's cool, because the robot is in the customer service department, but that kiss-ass routine is going to wear thin with Pepper's co-workers. Just keep it away from the raptor.

A bigger Henn na Hotel will also need robots to get around a little quicker than Asimo and Pepper. Spot from Boston Dynamics seems to be a pretty good candidate. Think about an emergency situation: Spot kicks it into high gear and is on the scene in no time.

Despite Spot's potential to be the perfect emergency bot, it runs the risk of being a punching — or kicking — bag for frustrated hotel guests.

All of the aforementioned robots are pretty spectacular, but they're still a little wet behind their circuits. Henn na needs an experienced robot. That's why Curiosity is our final recommendation.

The Curiosity rover could easily become employee of the month considering its resume — it's been collecting and analyzing Martian material since 2012 and has a great social media presence. (Video via NASA)

The problem is Curiosity works alone and has been for a while, so it probably won't vibe well any of the other robots at the hotel. Add in the fact NASA is extending Curiosity's mission indefinitely, there's no telling when, or if, it'll ever pick up any shifts at the hotel.

Hire who you want, Henn na. Just make sure you don't let these guys anywhere near the entrance. (Video via DARPA)