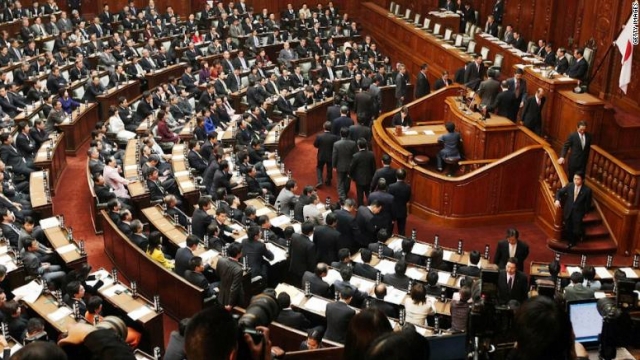 SMS
Japan Ruling Party Invites Women To Meetings - But Only to Observe
February 20, 2021
Five female lawmakers have been invited to observe all-male political board meetings in Japan - as long as they don't having anything to say.
SHOW TRANSCRIPT

Japan’s ruling party is allowing women to attend key political meetings but only as observers. A condition that is causing outrage. This is what Japan’s leadership looks like. The ruling party wants more women at key meetings as long as they don’t talk. The leader of the liberal Democratic Party proposed allowing five female lawmakers to join its nearly all-male board meetings but only as observers.

Toshihiro Nikai, the party’s 82-year-old Secretary General, said its important for women to “understand what kind of political discussions are happening so it’s about letting them take a look.”

Outrage ensued. Social media users decried the LDP proposal as tone deaf and yet another example of deep rooted sexism in Japanese society.

Japanese write Mieko Kawakami tweeted that “women are treated as second class citizens forever here in Japan.” Others mocked the idea as a “field trip” for women.

The proposal comes in response to criticism that the LDP’s board is dominated by men. On February 15, Tomomi Inada, who was Japan’s second female defense minister, wrote this letter to Nikai, asking for more representation of female lawmakers.

Tomomi Inada, lawmaker: “Japan is a democracy without women… the perception that politics should be done by men still widely exists in Japan, and the perception that good women are those who behave properly and don’t push themselves forward also still exists.”

Just days before Yoshiro More, the 83-year-old Tokyo Olympics Chief, resigned after making sexist comments that women speak too much during meetings resulting in international condemnation. Experts say Japanese politicians have gotten away with blatantly sexist comments in years past but no longer.

Kathy Matsui, Former Vice Chair, Goldman Sachs: "10, 20, 30 years ago, people would have just sort of brushed it off 'Oh, that's another politician making, you know, a foot in the mouth comment and write it off.' Whereas now, particularly in this world of social media, you can't get away with it that easily."

The World Economic Forum calls Japan’s gender gap “by far the largest among all advanced economies” ranking it 144th place on its political empowerment index between Qatar and Inada says Japan is still 20 years behind other developed countries in gender equality and that more drastic change is needed.

Tomomi Inada, Lawmaker [English translation]: "I think we should introduce a quota system...we are proposing to make 30% of the candidates for election female. Without doing this, I don't think we will have change for even another 10 or 20 years."

Selina Wang: "What about yourself, do you still have plans to become prime minister?" She says yes, she’ll keep challenging the status quo.