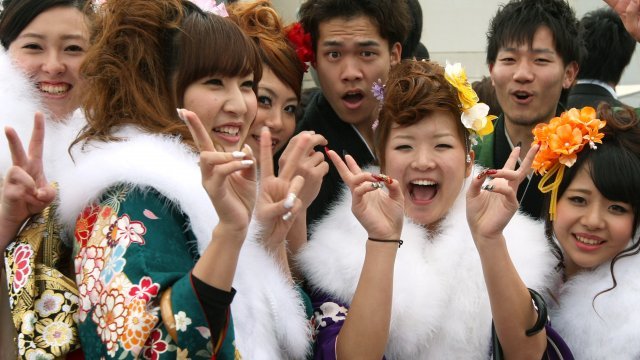 SMS
Facing An Aging Population, Japan Lowers Its Legal Age Of Adulthood
June 14, 2018
Japan lowered the legal age of adulthood from 20 to 18, hoping it will motivate young people to spend more and contribute to its economy.
SHOW TRANSCRIPT

Adulthood is about to come sooner for young people in Japan.

The Japanese parliament passed a law lowering the legal age of adulthood from 20 to 18. The change will go into effect in 2022, meaning the new law will not apply to people who are currently 18 years old.

Under this change, 18-year-olds in Japan will be able to get married without their parents' permission. They'll also be allowed to apply for loans and credit cards and receive 10-year passports as opposed to 5-year ones.

However, the change does not make it legal for them to smoke, drink or gamble. You still have to be 20 to do all that in Japan.

Japan has an aging population and a low birth rate. With declining population numbers, the country needs more people to pay taxes to support government programs like pensions and health care. Supporters of this change hope this newfound independence can motivate younger people to spend more and contribute to the economy.

But concerns still remain. Critics say 18-year-olds might not be responsible enough to make big decisions for themselves. And some are concerned this new law could impact Japan's annual Coming of Age Day ceremony. There are worries that if they have more responsibilities, young people will be too busy to participate or couldn't afford to rent a kimono, which can cost hundreds of dollars.

There are still other things that need to be straightened out. For example, lawmakers are still debating whether 18- and 19-year-old criminals will be treated as adults or juveniles under the new law.