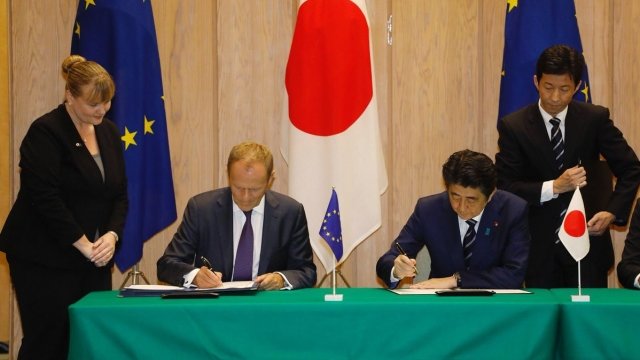 Japan and the European Union have signed a trade deal that pretty much gets rid of all tariffs on products they trade.

Tusk called it "the largest bilateral trade deal ever."

The deal was mostly hashed out last year, and the ceremonial signing was scheduled for earlier this month. But Abe canceled his trip after heavy rains in Japan caused flooding and landslides, killing more than 200 people.

While the measures won't go into effect immediately, the Associated Press reports that the deal eliminates about 99 percent of the tariffs on Japanese goods exported to the EU and about 94 percent of tariffs on European goods sold to Japan — though that number will reportedly rise to 99 percent in the future.

This agreement is a big deal, since trade between the EU and Japan covers about a third of the world's global economy.