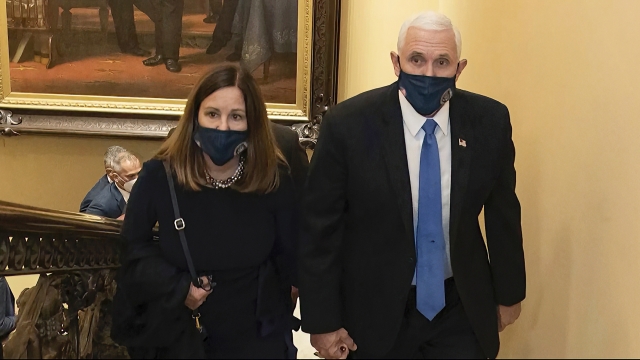 SMS
Jan 6. Panel: Trump Unleashed Violent Mob On Pence
By Nathaniel Reed
By Nathaniel Reed
June 16, 2022
The committee showed that even as rioters breached the Capitol, Trump posted a tweet condemning Pence for refusing to reject the election results.

The relationship between Donald Trump and his vice president was so contentious by the morning of January sixth, 2021, that Trump family members and other presidential aides, shown in never-before-seen photos, overheard him calling Mike Pence vulgar names, saying he made the wrong decision picking him to be his vice president in a last-minute phone call before Pence went to the U.S. Capitol to preside over the certification of the election.

"In my memory, I remember hearing the word 'wimp.' Either he called him a wimp — And I remember he said, 'You are a wimp. You'll be a wimp.' Wimp is the word I remember," Former Assistant to President Trump Nicholas Luna said.

The committee investigating the attack on the Capitol laid out evidence that Trump was repeatedly told his plan to overturn the election results was illegal, but he continued to pressure Pence.

The scheme came from a conservative lawyer, John Eastman — who the committee showed was even skeptical that his own plan to deny Joe Biden the presidency would work — but pushed the vice president to go through with it anyway.

Top aides to the president and vice president rejected Eastman's theories and warned of dire consequences if the election were overturned.

"I said, 'Hold on. You're saying the vice president can be sole decision maker?' He said, 'Yes.' I said, 'Are you out of your [expletive] mind? You'll cause riots in streets.' He said words to the effect of, 'There's been violence in our history to protect the Republic,'" " White House Attorney Eric Herschmann recounted.

"That declaration of Trump as next president would've plunged America into what I believe would've been tantamount to a revolution within a constitutional crisis," Luttig said.

Even as rioters breached the Capitol, the committee showed Trump posted a tweet condemning Pence for refusing to reject the election results.

Pence spent four and a half hours in a secured location in the Capitol complex, at one point only 40 feet from the rioters.

Some never before seen pictures show the vice president in a secure underground location, watching a videotaped message the White House eventually released, where President Trump asked his supporters to go home.

"The vice president did not want to take any chance that the world would see the VP of the U.S. fleeing the United States Capitol," Jacob said. "He was determined that we would complete the work that we set out to do that day, that it was his constitutional duty to see it through."

Though Pence returned to allow the certification of the 2020 ballots to proceed, Judge Luttig warned the committee a similar attempt coup be made to control the outcome of the next presidential election in 2024.