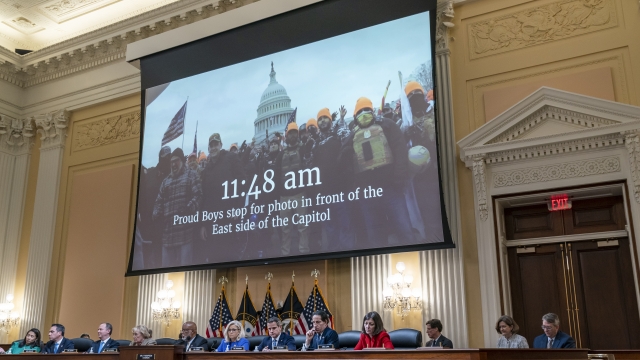 A warning came from a former Oath Keeper who said the U.S. is lucky more blood has not yet been shed.

"The best illustration of what the Oath Keepers are happened January 6 when we saw that stacked military formation up the stairs of the capitol. I can tell you that they might not like to call themselves a militia but they are, they are a violent militia," said Jason Van Tatenhove, a former Oath Keeper.

Testimony in the January 6 committee hearing showed how extremist groups were mobilized by what election experts call the big lie.

Dr. Donell Harvin is the former chief of Homeland Security in D.C.

"We got derogatory information from OSINT, suggesting that some very, very violent individuals were organizing to come to D.C. and not only were they organized to come to D.C. but these groups, these non-aligned groups were aligning. And so, all the red flags went up at that point," Harvin said.

A Twitter employee, whose identity was concealed, described then President Trump assembling an angry mob with a December 19 tweet.

"It felt as if a mob was being organized and they were gathering together their weaponry and their logic and their reasoning behind why they were prepared to fight. It was nonspecific, but very clear that individuals were ready, willing, and able to take up arms," the employee said.

A major enabler of the QAnon conspiracy theory testified that he attended the January 6 rally because of Trump’s tweet, promising “it will be wild!”.

Jim Watkins is the operator of a notorious fringe website, and QAnon conspiracy theorist.

"When the President of the United States announced he was going to have a rally, then I bought a ticket and went," Watkins said.

Lawmakers shared evidence that tied Trump's associate Roger Stone and Trump’s former national security adviser Michael Flynn to the Proud Boys and the Oath Keepers — writing encrypted messages to them and using them as security guards.

As January 6 neared, an expert tells Newsy that members grew more willing to stand alongside people with different ideologies.

Sam Jackson is the author of ‘Oath Keepers’.

"By January 6, Oath Keepers was now suddenly willing to be part of the same crowd that contained out now white supremacists, racists, and the so-called western chauvinists that the Proud Boys described themselves to be. January 6 was the first time that we really saw Oath Keepers engage in organized violence against the government in such a dramatic way," Jackson said.

The hearing’s focus on extremist groups comes just after the Justice Department said prosecutors have evidence that Oath Keepers transported explosives to the Washington, D.C., area the day of the insurrection, had bomb-making instructions, possessed a “death list” of election officials, and tried to acquire a firearm meant to look like a smartphone.