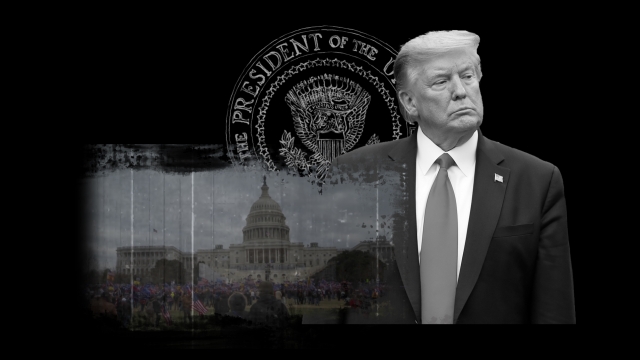 Over the course of eight hearings, the Jan. 6 committee laid out a case for the public about former President Trump's false claims of election fraud, the violence that unfolded Jan. 6 and what they've called his "dereliction of duty."

"Over multiple months, Donald Trump oversaw and coordinated a sophisticated, seven-part plan to overturn the presidential election and prevent the transfer of presidential power," Liz Cheney, vice chair of the Jan. 6 committee, said. "In our hearings you will see evidence of each element of this plan."

According to the committee, that "seven-part plan" involved an effort to spread false information about the 2020 election, a plan to replace the acting attorney general pressing Vice President Mike Pence not to count certified electoral votes as well as a push to have state election officials and legislators to change results.

The committee says evidence also shows Trump's legal team and associates instructed Republicans to create false electoral slates and submit them to Congress and the National Archives. They say he also summoned and directed a violent mob to attack the Capitol then failed to act immediately to help stop the rioters.

The latest hearing detailed the timeline of the violence at the Capitol and the action, or inaction, behind the scenes at the White House.

"We were in a room full of people, but people weren't paying attention," Sarah Matthews, former deputy press secretary, said. "So [Kayleigh McEnany] looked directly at me, and in a hushed tone, shared with me that the president did not want to include any sort of mention of peace in that tweet and that it took some convincing on their part, those who were in the room."

Witness testimony showed people urging Trump to condemn the violence right away, as he sat in the dining room watching the coverage.

While the committee has laid out a case in the court of public opinion, questions remain on the consequences the former president potentially faces as the Justice Department probes deeper into the events of Jan. 6.

The Justice Department asked the committee to share information regarding the Trump team's alleged scheme to create a slate of false electors who would back the former president in the 2020 presidential election. But, it's still unclear when or how that information will be shared with the department.

However, that's just one part of Trump's alleged "seven-part plan" that could come under review. Newsy asked committee member Rep. Jamie Raskin if the committee was successful in sharing their message. Rep. Raskin was confident they were.

"The point of this select committee was to analyze everything: all of the crimes, what happened on Jan. 6, what we're the causes, what do we need to do to fortify our institution against coups and insurrections and political violence," Rep. Raskin said.

As for how likely they were to prompt the DOJ to take action, he was less certain.

"The DOJ has a lot more resources than we do to collect evidence, and that of course is the major business they're involved in," Rep. Raskin said. "So I don't think we really give them a lot they didn't already have, or at least didn't have the capacity to get."

The Justice Department prosecuted more than 800 people for their role in the insurrection. The DOJ doesn't publicly talk about its work and hasn't mentioned Trump, but earlier this week, Attorney General Merrick Garland said no one is above the law.

ATTORNEY MERRICK GARLAND: No person is above the law in this county. Nothing stops us.

REPORTER: Even a former President?

GARLAND: No. I don't know how to – maybe I'll say that again. No person is above the law in this country. I can't say it more clearly than that. There is nothing in the principles of prosecution, in any other factors that stops us from investigating anyone, anyone, who is criminally responsible for an attempt to undo a democratic election.

Above the law or not, there are legal challenges to prosecuting a former president. It's unprecedented, and it's also difficult to prove whether there was a specific criminal intent or act.

For his part, Trump has criticized the hearings as a witch hunt, and some of his supporters have seemingly agreed.

"This accusation of dereliction of duty in particular is one of the least effective accusations, considering it is not actually the duty of the president of the United States to secure the Capitol," Corinne Clark, co-founder of Freepressfail.com, said. "They are trying to make that claim and they have no accusation of an actual crime, no actual dereliction of duty. What oath did he break?"

While there are currently multiple investigations into Trump, the ones that stand out are probes into the alleged "fradulent electors." Georgia prosecutors announced earlier this month, some 16 people could face charges for election interference.