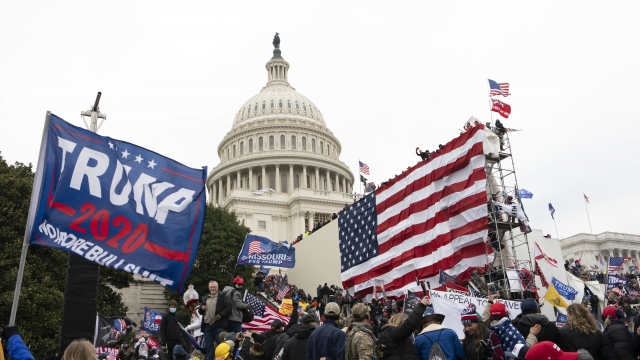 The first of several public hearings will be broadcast live Thursday night on Newsy at 8 p.m. ET.

With never-seen video, new audio and a “mountain of evidence,” the House committee investigating the Jan. 6 attack on the U.S. Capitol will attempt to show not only the deadly violence that erupted that day but also the chilling backstory as the defeated president, Donald Trump, tried to overturn Joe Biden's election victory.

Thursday's prime-time hearing will open with eyewitness testimony from the first police officer pummeled in the mob riot and from a documentary filmmaker who recorded the melee, and it will feature the committee's accounts from Trump’s aides and family members of the deadly siege that put U.S. democracy at risk.

The House select committee investigating the Jan. 6 attack on the U.S. Capitol will present an overview of its findings on Thursday at 8 p.m.

The Jan. 6 panel's yearlong investigation into the Capitol attack will begin to show how America’s tradition of a peaceful transfer of presidential power came close to slipping away. It will reconstruct how Trump refused to concede the 2020 election, spread false claims of voter fraud and orchestrated an unprecedented public and private campaign to overturn President Biden’s victory.

The committee's investigation with 1,000 interviews is intended to stand as a public record for history. A final report aims to provide an accounting of the most violent attack on the Capitol since the British set fire to it in 1814 and to ensure such an attack never happens again.

Against this backdrop, the committee will try to speak to a divided America, ahead of the fall midterm elections, when voters decide which party controls Congress. Most TV networks — including Newsy — will carry the hearings live, but Fox News Channel will not.

First up will be wrenching accounts from police who engaged in hand-to-hand combat with the mob, with testimony from U.S. Capitol Police Officer Caroline Edwards, who was seriously injured in the attack. Also appearing Thursday will be documentary maker Nick Quested, who filmed the extremist Proud Boys storming the Capitol. Some of that group's members have since been indicted, as have some from the Oath Keepers, on rare sedition charges over the military-style attack.

Along with the live eyewitness testimony, the panel will unveil multimedia presentations, including unreleased video and audio, and a "mountain of evidence," said a committee aide who insisted on anonymity to preview the hearing. There will be recorded accounts from Trump's senior aides at the White House, the administration and the campaign, as well as members of Trump's family, the aide said.

The proceedings are expected to introduce Americans to a cast of characters, some well known, others elusive, and to what they said and did as Trump and his allies tried to reverse the election outcome.

The Justice Department has arrested and charged more than 800 people for the violence that day, the biggest dragnet in its history.