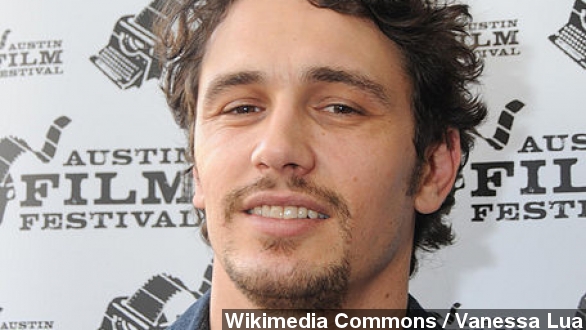 By Lauren Zima
March 27, 2014
James Franco has released — what else — a book of poems, and apparently, some of them are about Lindsay Lohan.
SHOW TRANSCRIPT

James Franco is like Lady Gaga: he surprises you so much, you're close to not caring. Except he just wrote a bunch of poems about Lindsay Lohan. And yeah, we care.

In a new interview with LA Magazine, the actor/artist/student/whatever talks about his new book of poems — and apparently some of them are about LiLo. He says it's nothing bad, but could've been!

​​"Lindsay herself has told lies about me with her people-she's-slept-with list! So I feel like what I said is much less than what she's said."

Franco is referring to this report from In Touch earlier this month — the mag claimed to have a list Lindsay had written herself, detailing all the celebrities she'd slept with. Franco was on it.

Well, maybe the UCLA and Columbia-educated actor knows something we don't about the validity of the report. Again... it's from In Touch Weekly. Lohan never commented on it.

But what do his poems say? Not really clear — you may just have to buy his book, "Directing Herbert White." (Via Amazon)

We do know the poetry covers Franco's life in Hollywood, including when he lived at the Chateau Marmont, a favorite haunt of Lilo's. Back in March 2013, Franco said he met Lohan while he lived there. (Via CBS)

And said she tried to sleep with him then — and that he turned her down. (Via New York Post)

But you know, nothing to really drive your point home like a poem. Tweet us and let us know who you guys believe in this he said/she said. We appreciate comments in haiku form.