James Corden Shines In 'The Phantom Of The Opera' 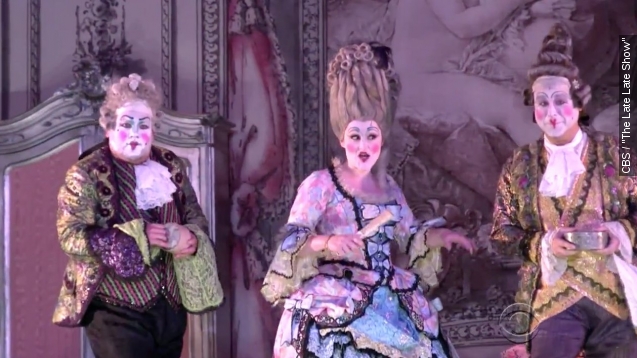 SMS
James Corden Shines In 'The Phantom Of The Opera'
By Katherine Biek
By Katherine Biek
September 11, 2015
'The Late Late Show' host met with the 'Phantom' cast expecting to play the lead role but instead was resigned to playing a minor character.
SHOW TRANSCRIPT

"The Late Late Show" host James Corden might not have gotten to play his dream role when he performed with "The Phantom of the Opera" cast in Hollywood.

Instead of getting to play the Phantom, he realized he would be playing the role of Fop 2 — a hairdresser.

Still, Corden really grabbed hold of his character and played it to perfection.

"The show doesn't work without him," Corden said prior to the performance.

It's no surprise that Corden alluded to "The Phantom of the Opera" being one of his favorite musicals. The movie version made around $155 million worldwide at the box office.

And it's currently the longest-running show on Broadway. Having opened in 1988, the show has been performed almost 11,500 times as of September 6, 2015. (Video via The Phantom of the Opera)

Fans loved Corden's performance, including one man who tweeted, "That Phantom of The Opera bit is one of the best things James Corden has ever done!"

Perhaps all the adulation is what helped Corden realize this:

"The actual heartbeat of the musical 'The Phantom of the Opera' is the Fop 2," Corden said.

OK, maybe not the point of the play. But we'll give it to him.