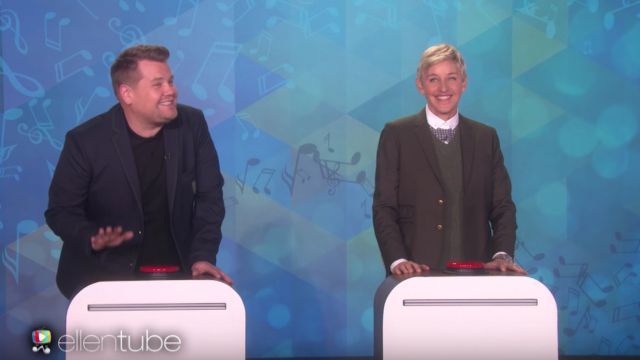 By Sabrina Russello
February 8, 2017
Taylor Swift's "Bad Blood" and Rihanna's "B*tch Better Have My Money" were part of the lyric lineup.
SHOW TRANSCRIPT

The Grammys are live on Sunday, and if you weren't already pumped for them, this may do the trick.

"Late Late Show" host James Corden and Ellen DeGeneres pre-gamed for the Grammys on a recent episode of "The Ellen DeGeneres Show" with a little game called "Finish the Lyric."

Both DeGeneres and Corden are huge music fans. DeGeneres dances with her audience at the beginning of every show, and Corden is the host of the well-known segment Carpool Karaoke. He's also this year's Grammy host.

The competition was tight to say the least, and both competitors essentially put everyone else's lyrical abilities to shame.