James Comey's Memos On His Interactions With President Trump Are Out 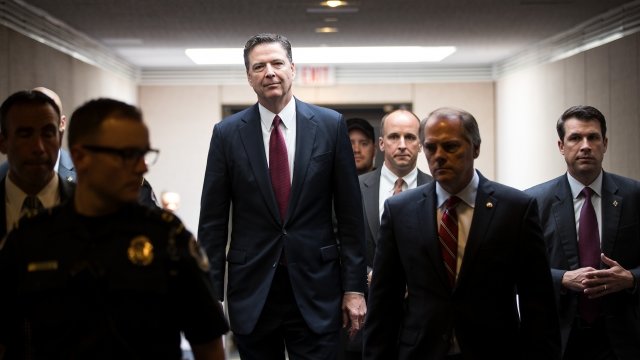 Former FBI Director James Comey wrote several memos about conversations he had with Trump that he said concerned him. Now, you can read those memos.

The memos that former FBI Director James Comey wrote about his interactions with the president are out, and they're largely not surprising.

Several news outlets published the memos Thursday night. They detail seven conversations between Comey and President Trump. And the details parallel what Comey told lawmakers in his testimony, what he wrote in his book and what he said in interviews lately.

There are some new nuggets of info. But they probably don't have any legal implications, and they're a little out there. Comey says the president talked about putting reporters in jail, and he writes that Trump recalled talking to Russian President Vladimir Putin about prostitutes. He also said the president wasn't impressed with former national security adviser Michael Flynn's intellect.

James Comey: Trump's Comment May Be Obstruction Of Justice

The former FBI director said his conversation with President Trump about the Michael Flynn case last year might be evidence of obstruction of justice.

The Department of Justice sent redacted versions of Comey's memos to Congress on Thursday. It promised unredacted, classified versions on Friday. The move came in response to a request for the memos from House Republicans.

The move could help quell a battle between supporters of the president on Capitol Hill and Deputy Attorney General Rod Rosenstein. Some lawmakers have slammed Rosenstein lately for holding out on releasing certain documents related to the Russia investigation.