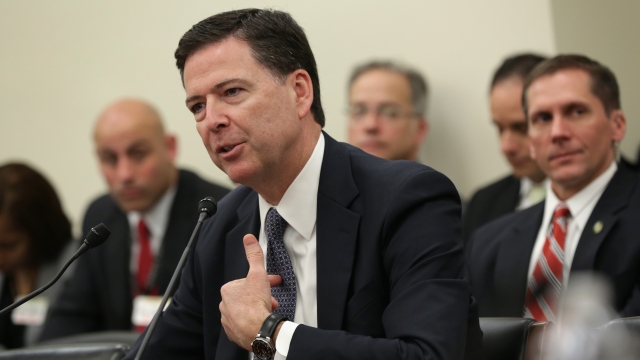 SMS
We'll Have To Keep Waiting For Comey's Account Of Why He Was Fired
By Grant Suneson
By Grant Suneson
May 12, 2017
Former FBI Director James Comey declined an invitation to speak in front of the Senate Intelligence Committee.
SHOW TRANSCRIPT

President Donald Trump's administration offered a few explanations about why FBI Director James Comey was fired. But we may have to wait for a while to get Comey's side of the story.

"We just heard from the director that he's not able to make Tuesday," committee Vice Chairman Sen. Mark Warner said. "It's my hope that that we will be able to find a time."

This comes after acting FBI Director Andrew McCabe took over for Comey's scheduled appearance to testify publicly about the investigation into the Trump campaign's alleged ties to Russia on Thursday.

Neither hearing would technically be about how or why Comey was fired, but it's a safe bet someone would have brought it up.

Without Comey's testimony, it could be tough to determine what led to his dismissal — unless the tapes President Trump alluded to on Twitter materialize.

Trump tweeted, "James Comey better hope that there are no 'tapes' of our conversations before he starts leaking to the press!"

Trump said that in those conversations Comey told him he wasn't under investigation. Others close to Comey told reporters Trump used a dinner meeting to demand Comey's loyalty.

When asked about the tweet, press secretary Sean Spicer refused to talk about it.

"The president has nothing further to add on that," Spicer said at a press briefing. A little later, he said: "The tweet speaks for itself. I'm moving on."