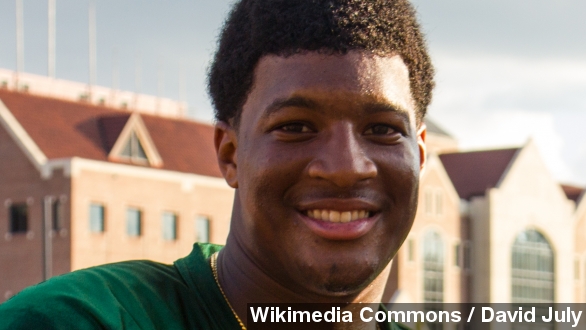 By Jamal Andress
April 30, 2014
Jameis Winston has found his way back into the news, this time for shoplifting $32 worth of fresh Florida crab legs.
SHOW TRANSCRIPT

Which one of these things is not like the other: Heisman Winner, National NCAA Champion, or crab-legs Shoplifter?

"Jameis Winston was issued a citation Wednesday for shoplifting crab legs." (Via ESPN)

"The Heisman trophy winner allegedly walked out of a grocery store near the Florida State campus with an order of crab legs he didn't pay for." (Via CNN)

Winston has found his way back into the news this time for walking out of a Tallahassee grocery store with $32 worth of fresh Florida crab legs. He's also been suspended by the Florida State baseball team.

"Jameis Winston was very cooperative. ... He indicated to the deputies he had forgotten and when he got home he realized he had not paid but he in fact had made no effort to contact Publix for a return to pay." (Via  WTXL)

Fortunately for Winston he was not arrested. According to the Tallahassee Police Department he has entered a pre-trial program designed to keep people out of the criminal justice system and all he will have to do is perform community service and pay a $30 fine. (Via Florida State University)

As the Miami Herald points out, "Winston is one of the most-celebrated and most-scrutinized figures in college sports."

Celebrated because of the massive talent he posses on the field and scrutinized for his alleged behavior off of it.

The same year Winston and his Florida State Seminoles went undefeated and Winston became the youngest Heisman winner ever he also faced sexual abuse charges from a fellow FSU student.

And while the charges were dropped by local police for lack of evidence, a New York Times article published in mid-April alleges those investigating the rape case, "did little to determine what happened."

Obviously Jameis Winston should not be blamed for what the Talahassee Police Department did or did not do, but ESPN's Jemele Hill argues Winston should stay away from controversy nonetheless.

"NFL teams who probably after the incident or what didn't happen all that investigation were probably looking at him like, 'hmm wonder what this guy's about' now he's going to go into the season with a lot of questions."

Winston released a statement through his attorney concerning the incident but doesn't make it clear whether he actually forgot or meant to steal the items.

"I went to the supermarket with the intent to purchase dinner but made a terrible mistake for which I'm taking full responsibility. In a moment of youthful ignorance, I walked out of the store without paying for one of my items. ... I make no excuses for my actions and will learn and grow from this unfortunate situation." (Via SB Nation)