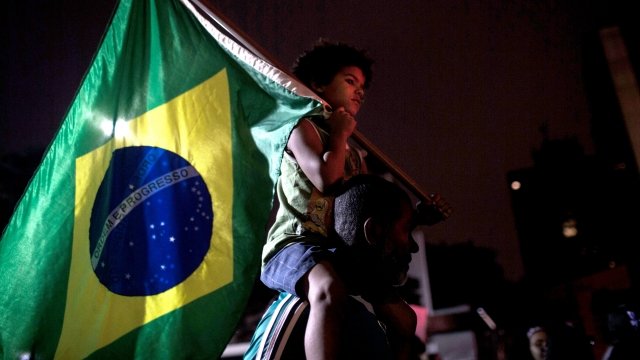 By Caitlin Baldwin
October 8, 2018
Jair Bolsonaro was just shy of the 50 percent needed to avoid a runoff.
SHOW TRANSCRIPT

Jair Bolsonaro had 46 percent of the vote after nearly all of the ballots were counted, just shy of the 50 percent needed to avoid a runoff.

Bolsonaro has been known for making controversial racist and homophobic statements. He's advocated for looser gun laws and has taken a strong stance against abortion.

In a distant second place was leftist Workers' Party candidate Fernando Haddad with 28.7 percent of the vote.

Haddad, the former Mayor of São Paulo, was handpicked by former president Luiz Inácio Lula da Silva to run in his place. Lula da Silva is serving a 12-year prison sentence for a corruption charge related to his presidency.

The country will vote between Bolsonaro and Haddad in the runoff election Oct. 28.