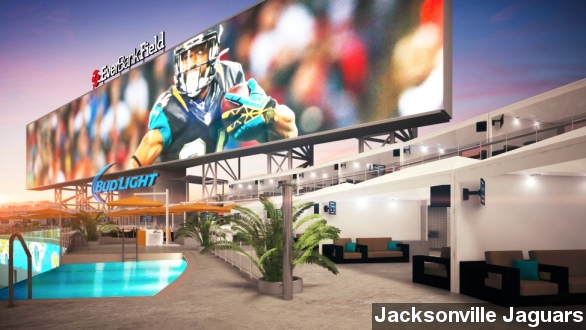 By Ben Lawson
June 9, 2014
The team announced the addition of a two-level party deck, which will take the place of nearly 10,000 seats.
SHOW TRANSCRIPT

After a less-than pleasing fan turnout at home games, the Jacksonville Jaguars will add pools to their stadium in hopes of drawing bigger numbers.

"It's no secret that there have been tarps on some of the seats and that they are trying to take some of the underperforming assets there and turn them into something else." (Via ESPN)

Monday the Jaguars announced they would be adding a two-level party deck complete with pools and 16 cabanas. Nearly 10,000 seats will be removed to make room for the addition, which is predicted to cost $63 million. (Via Jacksonville Jaguars)

SB Nation points out that this will rid the field of almost all the tarp-covered seats. "The long standing eye sore for the Jaguars will now for the most part, no longer exist."

Eric Grubman, the NFL's chief financial officer, told Fox Sports that he realizes the league's fan experience as a whole could be better and said administrators remained focused on improving "in-stadium engagement."

Jacksonville ranked 28th in attendance last year. That's the fifth worst in the NFL. Maybe it has something to do with the team winning 11 games in three years. (Via ESPN)

Chad Johnson, the team's senior vice president of sales, said 65 percent of the new luxury seating has already been sold for the 2014 season.