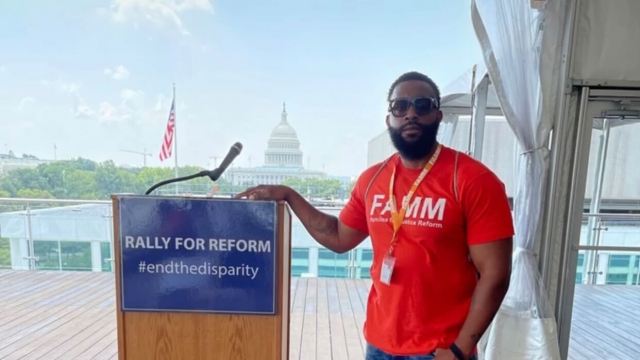 Supreme Court nominee Ketanji Brown Jackson faced tough questions during her confirmation hearing over her record and past rulings, with some Republicans calling her soft on crime.

"That would have been 1,500 criminals on the streets if you had your way," Sen. Marsha Blackburn said.

Jackson is a former public defender. She served as a judge on both federal levels and was on the U.S. Sentencing Commission.

During her time on the Sentencing Commission, Jackson voted to retroactively apply a new law designed to reduce sentencing differences between powder and crack cocaine offenses. That change would have cut prison time for some inmates already convicted of drug charges.

"If ever the day should come when the retroactive application of a guideline penalty reduction furthers our societal interests … this is that day," Jackson said.

This is a change meant to directly impact people like DeJarion Echols.

Echols is one of thousands of Black men who were given a mandatory minimum prison sentence for a non-violent drug offense. His sentence was made significantly worse by the disparity in punishment that treated powder differently than crack cocaine.

He was arrested in September of 2005. Investigators found drugs, money and a firearm in his apartment.

And while it wasn't a large enough amount of drugs on its own, the combination of money and the firearm triggered a mandatory minimum sentence of 20 years behind bars.

The judge disagreed with the sentence in open court.

"The judge actually stated, 'This is a situation where I would like to see a congressman sitting before me.' He expressed some empathy. He sympathized with what I was going through, but his hands were tied. He didn't want to give me that much time," Echols said.

The 2010 Fair Sentencing Act significantly reduced the disparity in sentencing but still treated crack worse than powdered cocaine. The reduction wasn't applied to Echols' sentence until 2018.

"It's like if Abraham Lincoln said, 'You know what, we recognize as a country that slavery is an abominable act. It's egregious in nature. We don't agree with it. So everyone born from this moment forward, is a free man. Everyone else is still enslaved,'" Echols said. "It makes no sense whatsoever. So over the years, I witnessed these laws change that would have benefited me had they been made retroactive."

Echols was released from prison in the summer of 2021.

Since his release, he's has traveled the country and testified in front of Congress about the importance of eliminating disparities in sentencing.

Most recently, he's advocated for the passage of the EQUAL Act which would treat drug offenses involving crack and powder cocaine as equals.

According to the U.S. Sentencing Commission, this bill would help 7,000 people get a cut in their sentence of more than six years on average.

The EQUAL Act passed the house last September with a bi-partisan vote of 361 – 66. Since then, it has been stuck in the Senate waiting to be called for a vote.