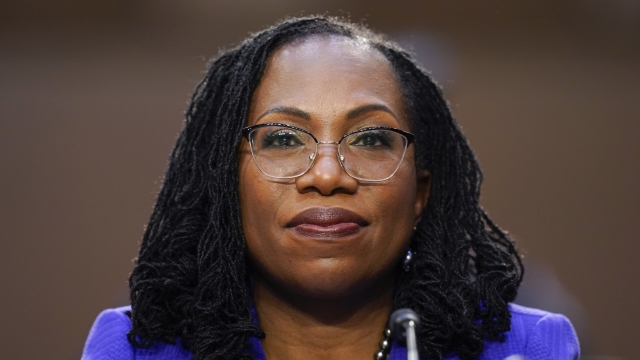 Judge Ketanji Brown Jackson's work as a public defender has been front and center during her confirmation hearing to become the next associate justice of the Supreme Court.

"Criminal defense lawyers make arguments on behalf of their clients, in defense of the Constitution, and in service of the court," Jackson said.

Jackson served as a federal public defender from 2005-2007. She has represented some high-profile defendants, including detainees at Guantanamo Bay.

Some Republicans said this role should be taken into consideration.

"Advocates to change the system, like she was advocating, would destroy our ability to protect this country. We're at war. We're not fighting a crime," Sen. Lindsey Graham said.

But Brett Tolman, who worked for Senate Republicans on the confirmation of both Justice John Roberts and Samuel Alito, says it shouldn't.

"It has been a little bit surprising that they're attempting to use it as an Achilles heel to attack the nomination," Tolman said. "You don't get to pick who you defend."

"It's a service," she said. "That's what you do as a federal public defender. You are standing up for the constitutional value of representation."

Amy Fettig is the executive director of the Sentencing Project.

"It's also ridiculous to think that somehow if you're a public defender, you're more biased than if you're a prosecutor," she said. "Couldn't we also say 'But my goodness, the defendants are going to be completely disadvantaged if we have a judge who was a former prosecutor.' That doesn't make sense at all."

Fettig says public defenders are a guardrail against government abuse, especially in an era of mass incarceration.

"Otherwise, if you don't have money, if you're not rich and powerful, you have no protections against the government," Fettig said.

If confirmed, Jackson would be the only sitting member of the bench who worked as a public defender. The last was Justice Thurgood Marshall who retired in 1991. She'd also be the only member who served on the U.S. Sentencing Commission, responsible for setting federal sentencing guidelines.

Republican Senator Josh Hawley criticized her role on the commission — which she was confirmed to in a bipartisan fashion. Tolman calls this criticism a disservice to the country and says sentencing at the low end of guidelines is not an indicator of whether she's politically driven.

"What I would want to know is: When did she go outside the guideline range? When did she push the facts in a way, or in a direction, that led her to make a decision against the recommendations of DOJ, or against the sentencing guidelines that were in play?" Tolman asked.

Jackson's likely confirmation will be historic for those who work in these roles, where the public defender pipeline to judge is virtually non existent.