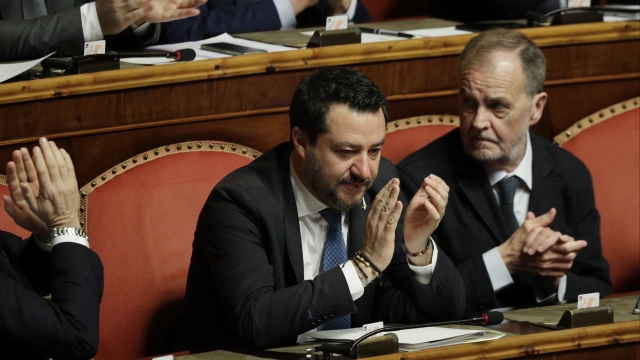 A right-wing opposition leader in Italy is facing kidnapping charges for sequestering Libyan migrants on a ship and denying them entry into Italy.

In a widely watched vote this week, the Italian Senate denied Matteo Salvini immunity from prosecution. Salvini, a senator and former deputy prime minister, is the leader of the ultra-nationalist League Party. While serving as interior minister last year, he refused entry to a series of ships carrying migrants seeking asylum in Italy.

He ordered 131 Libyan migrants held on an Italian coast guard vessel. They were barred from disembarking in Sicily for seven days. Eventually, they were transported to Spain, which accepted them.

In December, an Italian court ruled that Salvini should face criminal charges for depriving the migrants of their liberty. He could get up to 15 years in prison if convicted.

Addressing fellow senators, Salvini declared: "Defending the borders was my duty. I am proud of what I have done ... Let's have a judge decide if I am a criminal."

He later compared himself to President Donald Trump, tweeting: "I, like Trump? He has a few more billions and a few more years, but it's a bad little habit of the left, going around in the world, to try to win by judicial means."

Italy's prime minister, Giuseppe Conte, has called Salvini "obsessed" with keeping migrants out of the country.