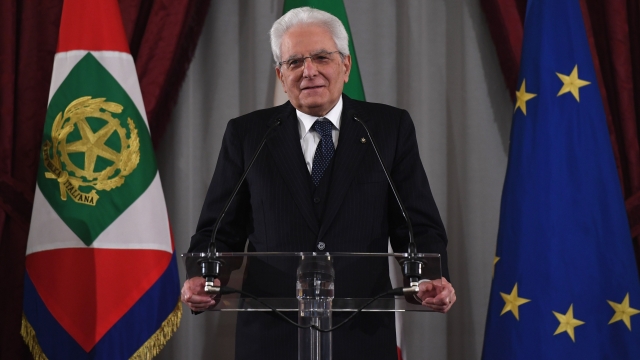 SMS
Italian President Mandates Formation Of New Coalition Government
By LeeAnne Lowry
By LeeAnne Lowry
August 29, 2019
The president had a choice to call for early elections or to consult with party leaders to see if they can form a new coalition government.
SHOW TRANSCRIPT

Two Italian political parties — the opposition Democratic Party and the anti-establishment Five Star Movement — were political enemies. But now they're coming together in response to a far-right leader who launched Italy's politics into crisis.

Under the country's ruling League party, led by Interior Minister Matteo Salvini, the country had a populist government that wanted the EU to take more hardline measures to address the flow of migrants to the continent. Many of those migrants land in Italy and seek asylum there.

But Salvini's party withdrew from its power-sharing coalition with the Five Star Movement, essentially shutting down the government. He then called a no-confidence vote against Prime Minister Giuseppe Conte. Many people saw the moves as a power grab to force snap elections and become the next prime minister.

Conte resigned before the confidence vote could happen. That gave the country's president a choice to call for early elections or to consult with party leaders to see if they can form a new coalition government.

President Sergio Mattarella consulted with Democratic Party and Five Star Movement leaders on Wednesday. They said they worked through their differences and agreed that Conte should be prime minister again. On Thursday, Mattarella mandated that Conte work with the two parties to form a new government.

The two sides now need to agree on policy and a team of ministers.