It's Very Likely William Shakespeare's Skull Is Missing From His Grave 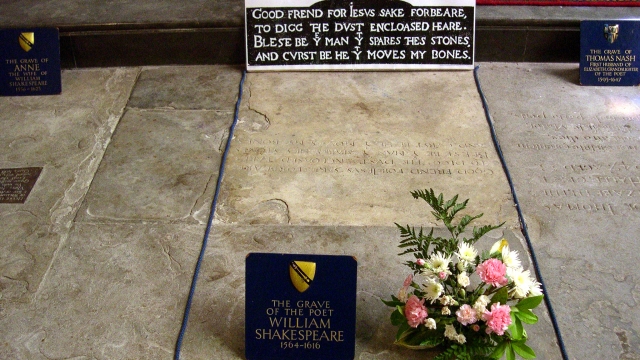 SMS
It's Very Likely William Shakespeare's Skull Is Missing From His Grave
By Ryan Biek
By Ryan Biek
March 24, 2016
A radar analysis of Shakespeare's grave reveals his head is likely missing, and researchers say it might have been stolen.
SHOW TRANSCRIPT

For the first time ever, archaeologists have investigated William Shakespeare's grave at England's Holy Trinity Church in Stratford-upon-Avon. And they've discovered something important might be missing: his skull.

The full story will be shown Saturday on Great Britain's Channel 4 in a documentary called "Secret History: Shakespeare's Tomb."

But the research team's leader said there was an "odd disturbance at the head end. ... It's very very convincing to me that his skull isn't at Holy Trinity at all."

There's long been a myth that grave robbers stole Shakespeare's skull in 1794.

The same researcher told The Guardian, "People wanted the skull of famous people so they could potentially analyze it and see what made them a genius. It is no surprise to me that Shakespeare's remains were a target."

But a vicar from the church where Shakespeare is buried told Sky News he's not convinced the skull was taken. The researchers were allowed to conduct their study because they used radar and didn't actually dig into the grave.

This year marks the 400th anniversary of Shakespeare's death, and still his burial is full of mysteries.

This video includes clips from Channel 4, and images from Getty Images, Tom Reedy / CC BY SA 3.0 and David Jones / CC BY 2.0.