It's Tough To Recycle Plastic In The U.S. 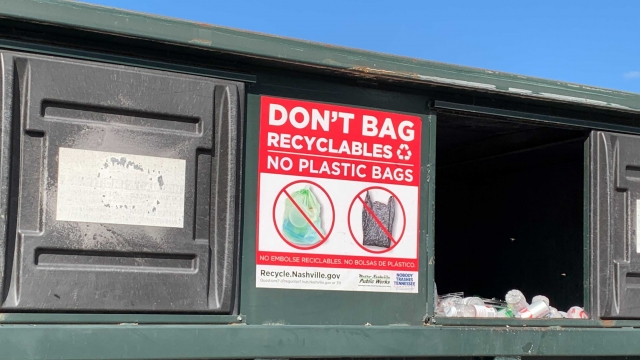 Virginia lives just outside of Nashville, Tennessee, and takes the time to recycle about once a month.

"Yup, one person," she said. "Somebody came here and put two bags. And you hope that's what's in there."

The EPA estimates Americans generated 292.4 million tons of trash in 2018. Twenty-three percent of it was recycled. Half of it ended up in landfills. If we break it down by material, paper and paperboard were 68% recycled. Glass, 25%. Metals, 34%. But plastics — only 9%.

Historically, plastic, which is made from natural materials like coal, natural gas and oil, has been the hardest to recycle, creating a plastic waste problem.

Most plastics have a number on them from 1 to 7.

"You get the most bang for your buck for your ones and twos," said Paul Farley, manager of the Nashville River Hills Recycling Center.

The rest has to go to a landfill because it's worth less.

"A plastic bag is by far the worst thing that could come through this plant," Farley said.

And recycling facilities like this are seeing everything from car parts to bowling balls.

"Everybody sees the emblem and people don't differentiate between the numbers in the symbol," Farley said.

Not only do you want to look at the number, but you also want to check to see if your recycling center accepts it. Just because a facility takes plastics with a 1 or 2 on it doesn't mean they take all of them.

In Nashville, plastics 1 and 2 are only accepted if it's a plastic bottle, jar or jug. For example, this plastic strawberry container, even though it has a 1 on it, does not get recycled because it's harder to process them with plastic bottles.

Black plastics present another issue: Older optical sorters have a hard time seeing them. It's also hard to turn them into a different color other than black.

He's aware that there's a plastic waste problem. He says more than 85% of his facilities only accept and sort plastics with a 1, 2 and 5 on them.

"Because the recycling rate for plastics is really low, is we're trying to see how can we unlock more of the supply to get it out of the landfill, to get it going into the recycling bins," he said.

The answer to lowering the amount of plastic waste? Experts say stop buying single-use plastics and buy things made from recycled materials.